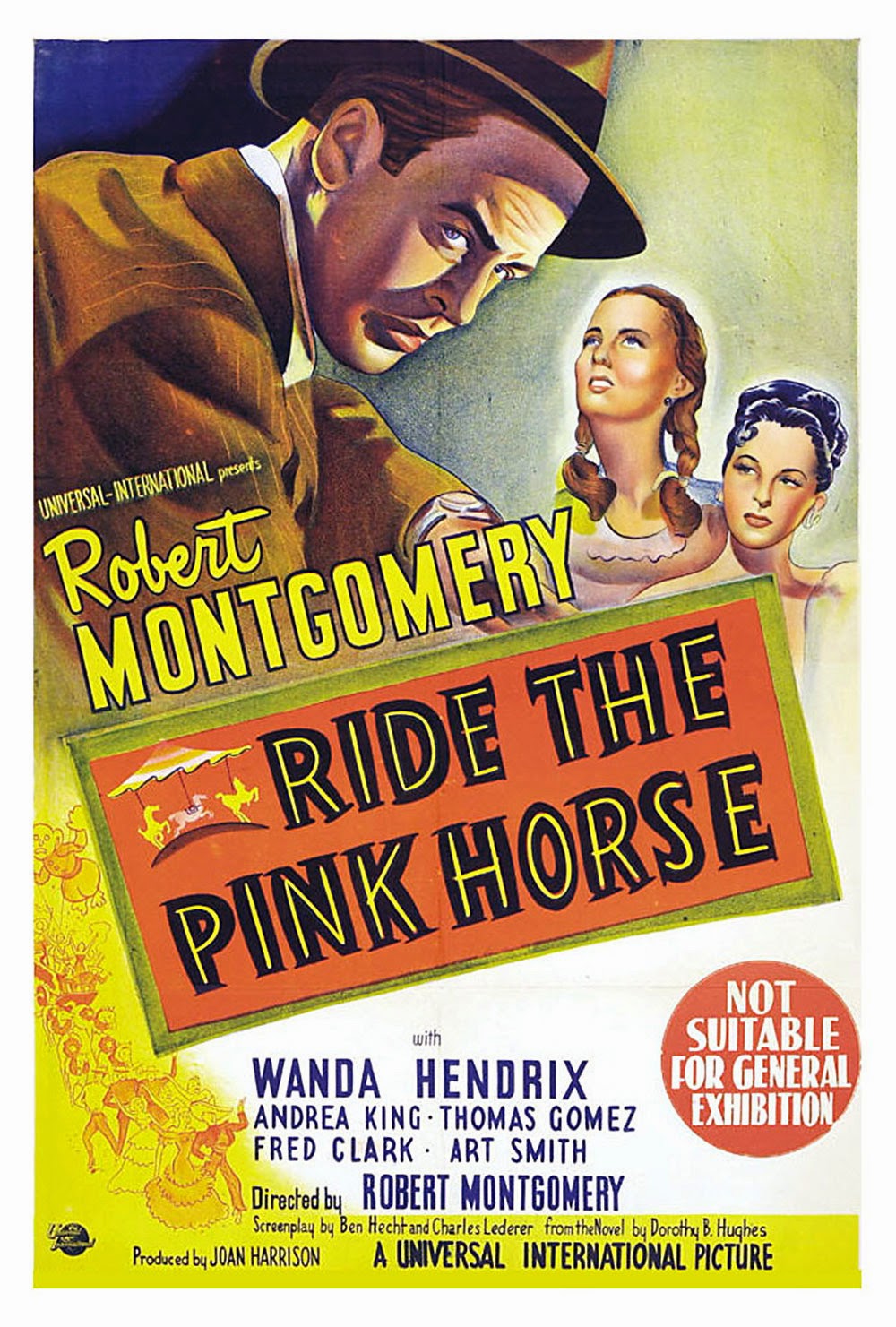 All film noir collectors should be aware RIDE THE PINK HORSE has been rescued from obscurity. It has received the prestigious Criterion Collection treatment, complete with informative supplemental material and an impressive 2K digital restoration of the feature film in its proper 1.37:1 aspect ratio, presented in 1080p via the Blu-ray edition. It is an underappreciated genre classic that stands out from other noirs of the late 1940s in regard to setting, characterizations, and resolution. Perhaps best of all, RIDE THE PINK HORSE is one of those rare movies that improves upon each viewing.

A Greyhound arrives in San Pablo, New Mexico with tough guy Lucky Gagin (Robert Montgomery, who also directed) as a passenger on a mission. Soon after he arrives, the superstitious young Native American woman Pila (Wanda Hendrix) insistently gives the outsider Gagin an Ishtam charm for protection. "From what?" he asks, but his question goes unanswered. Like a guardian angel, Pila proceeds to shadow Gagin wherever he roams. Her impulses are logical enough; Gagin has planned a confrontation with Frank Hugo (Fred Clark), a crime boss who ordered the elimination of Gagin's good friend. What Gagin should have planned in addition is a hotel reservation—it turns out rooms are in short supply with an annual fiesta about to commence. Gagin has a few drinks at a bar with Pancho (Thomas Gomez), the owner of a carousel with the pink horse of the film's title. Pancho extends the hand of friendship and offers Gagin shelter. Another guy on the trail of Hugo is G-Man Bill Retz (Art Smith), who is set up as a redemptive figure for Gagin.

For a noir film released in the late ‘40s, RIDE THE PINK HORSE communicates the noir visual style in a more subtle way than was typical of the time. There are the expected low camera angles, shadows cast by venetian blinds, uncertain nocturnal settings, and so on, but this film noir is defined first by its displaced protagonist. Not exactly the most likeable chap, Gagin admits, "I'm nobody's friend." A pushy, egocentric man, a litterbug, and openly racist, he calls Pila "Sitting Bull." Gagin is a veteran turned small-timer who never found his place in society after WWII. Whenever Gagin references the war, or much of any topic really, his tone is markedly bitter. As Retz puts it, "...you fought a war for three years and got nothing out of it but a dangle of ribbons." Postwar malaise only adds to Gagin's thorough hatred of Hugo, who managed to profit nicely from wartime economics. Robert Montgomery himself had served in the Navy as a lieutenant commander and was involved in the Normandy landings. His character Gagin may have survived the war, but Pila sees the disillusioned veteran as a dead man. The dead-man-walking is as familiar a noir theme as one is likely to find, i.e. THE DARK CORNER (1946), THE KILLERS (1946), OUT OF THE PAST (1947), ACT OF VIOLENCE (1948), D.O.A. (1950). And boy, does Gagin ever do a walking dead impersonation in the film's final act.


San Pablo seems a suitable environment for an American "man with no place," but the true obstacle for Gagin is Hugo, who attempts to draw a hard-boiled connection between himself and Gagin:

"You and me, we eat out of the same dish. You used to think if you were a square guy, worked hard, played on the level, things would come your way. You found out you were wrong. All you get is pushed around. You found that people are interested only in one thing:  the payoff.”

Fred Clark creates a memorable noir villain. His Hugo is at once convincing as an educated lowlife. He is a smooth talker and quick thinker when the occasion demands, but is saddled with a cumbersome hearing aid. By way of editing, Hugo is associated closely with Zozobra, "The God of Bad Luck," a papier-mâché creation that is torched each September as a fiesta highlight. The tradition is cyclical in nature—like the carousel. Gagin’s Zozobra is Hugo.

The film's pervasive noir themes are consistent with the genre, especially when it comes to gender roles. Women are not to be trusted, with Gagin as our compass for this idea. He is needlessly curt with Pila, who is nothing but nice to him, and his experiences with other women explain at least in part why. His ex has run off with a man who was more financially set, and the tough-talking dame Marjorie Lundeen (Andrea King) makes it quite clear that money means more to her than whatever her relationship is with Hugo. Gagin seems wiser than the average noir stiff about women, but he wrongly distrusts all women, including the young person who shows the most genuine interest in his well-being.

Two sequences contain violence that must have been quite a jolt for unsuspecting audiences of 1947. The attack on Gagin plays out with serious intent to kill and occurs just footsteps away from dining and dancing. Even more disturbing is the savage beating of Pancho, in full view of crying children aboard his carousel! If the protagonist Gagin is our subjective guide through San Pablo, these key sequences of violence suggest an objective viewpoint; a window into a dangerous border town where violence comes out of nowhere and no one is safe. These sequences confirm the connection between Gagin and Pancho within the inflexible boundaries of class distinctions. Gagin has more in common with working-class men like Pancho and Retz than he does Hugo. Only through banding together can such men hope to survive. The film's conflict is resolved when Gagin rejects the prospect of blackmail and adopts the philosophy of Pancho, who at one point tells Gagin, "I'm only happy when I got nothing." Only friendships mean something to Pancho, not material things. It is a familiar Hollywood tradition:  the impoverished are the happiest and least corrupted of folks. Thomas Gomez became the first Hispanic actor to receive an Academy Award nomination for his performance as the selfless Pancho.

Battle-tested director of photography Russell Metty photographed the Orson Welles film noir productions THE STRANGER (1946) and TOUCH OF EVIL (1958), the latter another border-town drama that would make an appropriate second feature after RIDE THE PINK HORSE. The long take that introduces Gagin at the bus station has its successor at the opening of TOUCH OF EVIL. The screenplay for RIDE THE PINK HORSE was written by Ben Hecht and Charles Lederer, working from the 1946 novel of the same title by Dorothy B. Hughes (IN A LONELY PLACE, 1947). The filmed adaptation was produced by Joan Harrison, who also contributed a draft of the screenplay. She had served as a co-screenwriter on a number of Alfred Hitchcock projects including JAMAICA INN (1939), REBECCA (1940), FOREIGN CORRESPONDENT (1940), SUSPICION (1941) and SABOTEUR (1942). She would move on to become one of the few female producers working in Hollywood at that time. Her earliest credits as producer were PHANTOM LADY (1944) and THE STRANGE AFFAIR OF UNCLE HARRY (1945), both directed by Robert Siodmak.

Montgomery was among the first of well-known actors to assume the director's chair. Just prior to RIDE THE PINK HORSE he directed and starred in his much better-known film noir LADY IN THE LAKE, a (mostly failed) first-person experiment. In 1950 the TV series Robert Montgomery Presents aired a "Ride the Pink Horse" episode. The story returned to the small screen again when the original film was remade as the 1964 made-for-TV movie THE HANGED MAN, directed by Don Siegel.

The audio commentary track, recorded in November 2014, brings together estimable film noir authorities Alain Silver and James Ursini, the film historians known for THE FILM NOIR ENCYCLOPEDIA and the FILM NOIR READER series. They offer a vast amount of detail about the careers of Montgomery and Harrison, and a great deal of evidence is provided regarding the noir elements that characterize RIDE THE PINK HORSE. The authors consider Montgomery’s film both naturalistic and archetypal noir. The duo also compares and contrasts the film with the Hughes novel, which was more cynical than the Hollywood interpretation possibly could have been.

Also insightful is the interview (19m 58s) with Imogen Sara Smith, the author of IN LONELY PLACES: FILM NOIR BEYOND THE CITY (2011). Smith calls attention to the fact that the border-town setting is not unique to RIDE THE PINK HORSE, but what is unusual is how integral some of the local people become to the storyline. The lead protagonist comes to recognize and accept his connection to the common people of San Pablo. Smith also advances the age-old argument that film noir is not a genre, but a style or mood. It is true that the film noir term did not exist until after the most robust cycle of noir had ended, but the absence of that term does not mean those involved in such productions were not clear about what they were filming! For some reason this is a very difficult concept for critics to grasp. 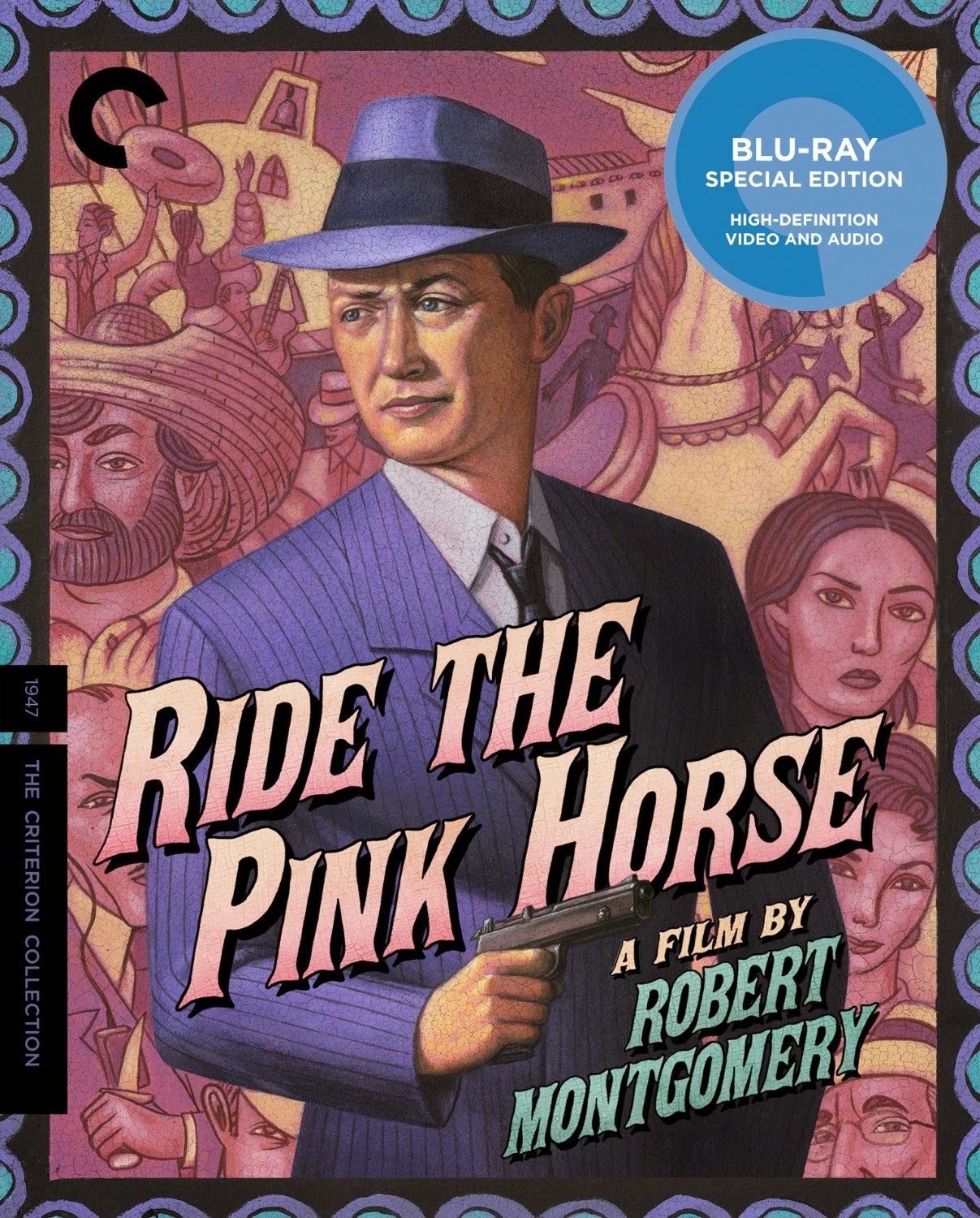 Another welcome feature of this Criterion disc is the Lux Radio Theatre adaptation (59m 32s) of the film, again with Montgomery, Hendrix, and Gomez. Also included is a booklet with the fine essay "Bad Luck All Around" by filmmaker and writer Michael Almereyda.
Posted by Eric Somer at 12:01 AM No comments: