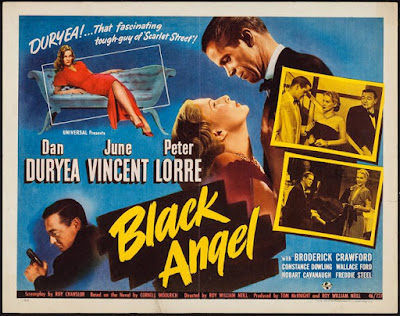 On paper, precious few film noirs convey potential commensurate with this one. Roy Chanslor's screenplay is based upon the 1943 Cornell Woolrich novel THE BLACK ANGEL, an amalgamation of two of Woolrich's short stories:  MURDER IN WAX and FACE WORK. Woolrich crime stories inspired such expressive go-to film noirs as PHANTOM LADY (1944), THE CHASE (1946) and THE WINDOW (1949). The cast includes two undisputed greats in Dan Duryea and Peter Lorre, as well as accomplished supporting players such as Broderick Crawford and Wallace Ford. BLACK ANGEL would be the final film directed by Roy William Neill, a talented filmmaker best known for helming Universal's popular Sherlock Holmes series with Basil Rathbone and Nigel Bruce.

From start to finish, most of the expected genre trimmings fall into place, but BLACK ANGEL is not mentioned alongside the most beloved film noirs of the mid-1940s for a reason. Though a production that sports little flab, it hobbles along pro forma in comparison with Universal's similarly structured, Woolrich-inspired PHANTOM LADY, which harbors another indefatigable woman at its center. The "wrong man" mechanics of BLACK ANGEL also got a workout in THE BLUE DAHLIA (1946), released by Paramount Pictures earlier the same year. Mostly bereft of the noir visual style that characterized other genre offerings of 1946, BLACK ANGEL lacks the certitude of purpose that darkly drives THE BIG SLEEP, THE DARK CORNER, GILDA, THE KILLERS, THE LOCKET and NOTORIOUS. The dismaying absence of a sense of dread probably best explains why BLACK ANGEL pales next to its more famous contemporaries.

When the curtain goes up, we meet a blackmailing woman whose time is coming to an end. Soon the strangled remains of Mavis Marlowe (Constance Dowling is quite a looker) are discovered as her own recording plays on her turntable. The song that spins was written by her ex Marty Blair (Dan Duryea), who would be an obvious suspect were he not locked in his own room after another of his patented evenings of excessive drinking at the time of the murder. Though he is shown only to have discovered her lifeless body, Mavis's boyfriend Kirk Bennett (John Phillips) is convicted of her murder and sentenced to death. His incredulous wife Catherine Bennett (June Vincent) forms an alliance with Marty in search of the real killer. In an effort to see if there is any dirt on Mavis's former employer Marko (the scene-stealing Peter Lorre), Catherine and Marty create the musical team Carver and Martin and accept regular work at Marko's nightclub Rio's. 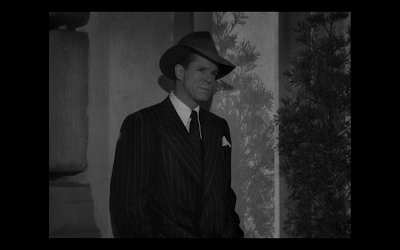 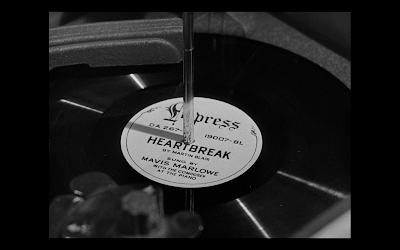 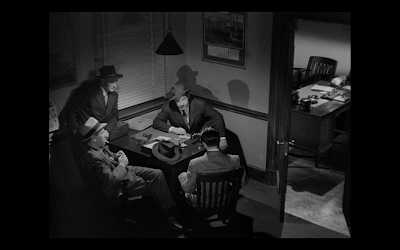 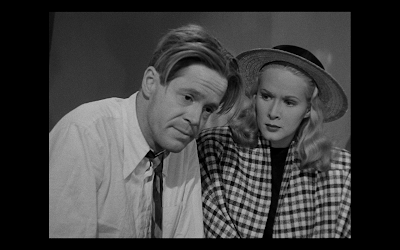 Even if its parts are not assembled in such a way to amount to a compelling whole, BLACK ANGEL honors genre conventions. Film noir credentials begin with a Los Angeles setting that houses an irredeemable femme fatale. Many other signals of noir authenticity leap out as the narrative chugs along, i.e. the framed, idealized photos that suggest the power of characters who are not present, a potentially dangerous stairway that leads to a mysterious lair, oblique camera angles that reflect the shifting sensibilities of a disoriented protagonist and a determined woman who seems not only convinced of her husband's innocence of criminal wrongdoing, but obsessed with it. A homoerotic subtext seems to exist between Marko and his sturdy-looking, discourteous manservant Lucky (former middleweight champ Freddie Steele), especially when the two monitor auditions for club entertainment. What might be the "most noir" of any genre example must be left to viewer subjectivity, but for me it has to be the manner in which cigarette smoking comments on the major male characters. When Marty strikes a match on his apartment wall to light a smoke, the marred wall provides evidence of how many times he has made that crude method a practice. We sense he is nearing rock bottom, or maybe has landed there already. And with a cigarette just barely hanging from his mouth, nobody looks anything like Peter Lorre, the embodiment of lackadaisical yet sinister authority. A classic movie moment is registered when Lorre blows out the flame that ignited his cigarette without removing the cig from his mouth. 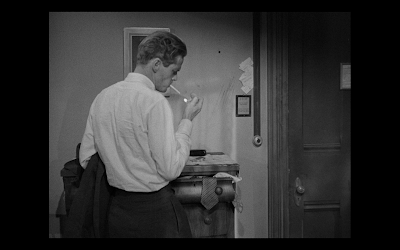 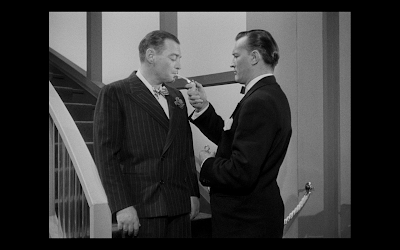 The major aftereffect derived from BLACK ANGEL is its formal indictment of alcoholism and related ruination of the chronically lovesick composer Marty. So dire is Marty's affliction that he must be confined to his tenement building after each night's pub crawl to prevent him from harming himself or others. When he writes a song for Catherine, he really seems like a glutton for punishment. Still faithful to the husband who maneuvered behind her back, Catherine rejects Marty's mawkish advances, which prompts the piano pounding drunkard to stand before a fire hose of alcohol. The lesson buried in all this is a familiar one to the noir form:  once you fall in too deep, it is all but impossible to claw your way out. This theme is supported by Marty's failed attempts to act responsibly, as when Dr. Courtney (Junius Matthews) does not believe Marty knows who really killed Mavis. A short time later, alcohol consumption prevents Marty from receiving a call that could rescue an innocent man from the gas chamber. 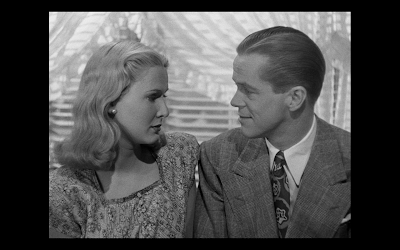 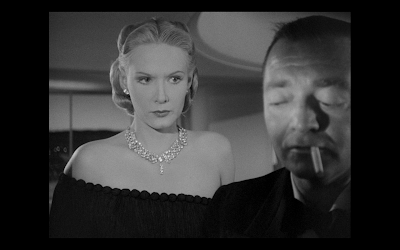 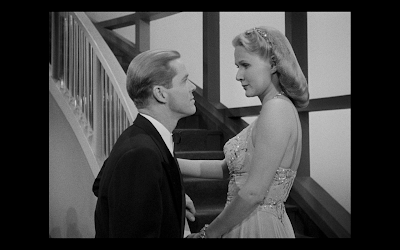 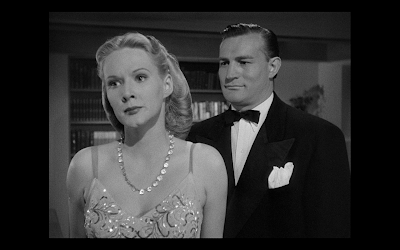 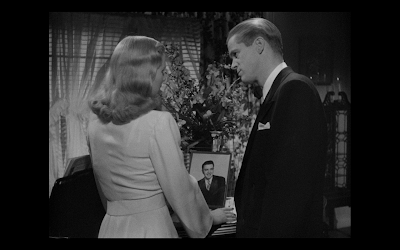 Woolrich thoroughly disliked his novel's adaptation, which minimizes lessons learned by the female protagonist of the source material. No doubt some of the concessions made for the sake of the Production Code lessened what could have been. Nonetheless this film noir boasts some excellent lines, for instance:

"Some guys are never satisfied."
"You've just gotta play detective, don't you? Do I go around playing the piano?"
"Let her cry it out."

A Blu-ray edition of BLACK ANGEL was issued earlier this year by Arrow Academy. Newly restored from an original nitrate combined 35mm fine grain positive and dupe negative scanned in 2K, the feature film is framed at 1.33:1 with uncompressed Mono 1.0 PCM as the main audio option (the disc's packaging incorrectly indicates an aspect ratio of 1.37:1). No matter, this dual-layered Blu-ray rendition presents superior contrast and more detail at the top and bottom of the frame versus the Universal Pictures Home Entertainment DVD released in 2004:

When it comes to audio commentary tracks, nobody shows up better prepared than film scholar and frequent film festival host Alan K. Rode, who always goes the extra mile for the most detailed production background information possible. Rode discusses the major contributors as one might expect, but also assigns credit to a number of the bit players. The 35-day production schedule began April 8th, 1946 on a $600K budget, a hefty amount for Universal at the time. The completed film was released theatrically in the US on August 2nd, 1946. This is a rare occasion when the major players performed their own musical numbers (Duryea at the piano with Vincent on the mic). In fact Vincent actually sang all three of the film's songs. Despite his off-camera reputation as a happily married fellow who walked a straight line, Duryea could not resist flirting with his blonde co-star during filming according to Vincent. Ava Gardner originally was to be loaned out for the role of Catherine Bennett, but Gardner quickly declined.

One of Rode's best stories about the cast involves Peter Lorre, who once was greeted by FBI agents at his doorstep. When the Feds pressed Lorre to reveal the names of any communist sympathizers he knew, Lorre proceeded to list everyone in Hollywood with whom he was acquainted, including notable studio bosses! The frustrated agents soon departed. Another interesting piece of information from Rode is in regard to film censor Joseph Breen, who was invited to the set to witness the black dress worn by June Vincent during one of the night club sequences. The filmmakers were concerned the Production Code Administration enforcer might consider Vincent's attire to be too revealing unless he saw it in person. As part of his Code approval process, Breen frequently employed the boilerplate message, "De-emphasizing the female figure, particularly breasts."

"A Fitting End:  Neil Sinyard on BLACK ANGEL” (2019, 20m 53s) collects the thoughts of the accomplished author Sinyard, emeritus professor of film studies at the University of Hull in the United Kingdom. He communicates a lot of information about the life of novelist Cornell Woolrich, who died from a stroke in 1968 at the age of 64. The character portrayed by Dan Duryea is about as close to a self-portrait of Woolrich as anyone is likely to see according to Sinyard. If that is basically correct, perhaps that observation is the reason why Woolrich did not have nice things to say regarding this adaptation of his work. The remaining supplemental material includes a theatrical trailer (1m 32s), a whopping 95 production stills as well as 17 posters and lobby cards, along with an illustrated booklet with an essay by Philip Kemp.

Another impressive product released by Arrow Academy, this is one of those cases when the great effort that went into the restoration work and supplemental material succeeded in making the product more collectible than it otherwise might have been. 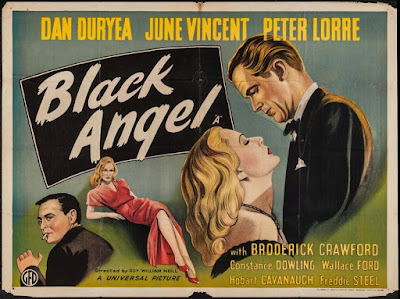 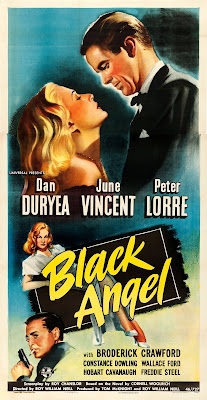 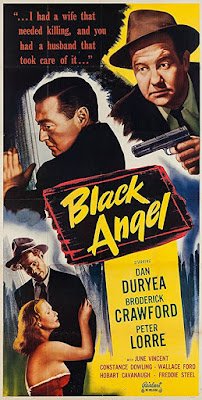 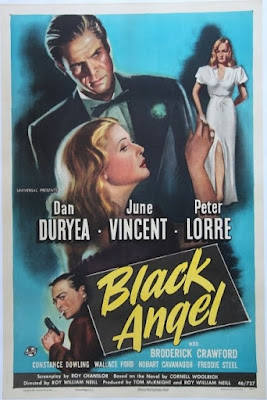 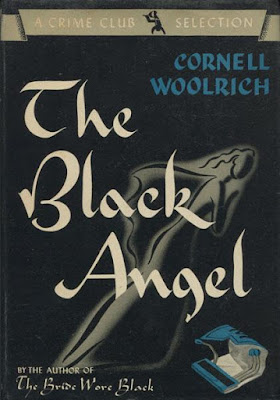 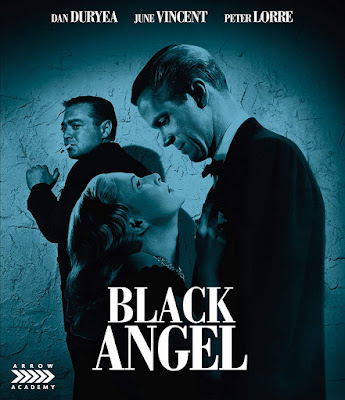