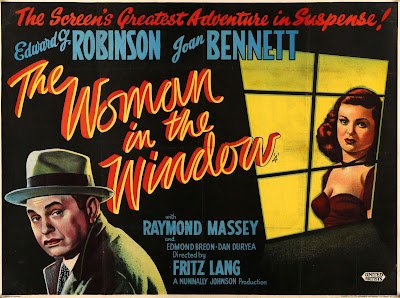 After he sees his family out of town, Richard Wanley (Edward G. Robinson) plans to enjoy a few drinks and cigars amongst friends. On his way to The Burgher's Club, the somewhat meek assistant psychology professor becomes enchanted with an idealistic portrait in a gallery window of a lovely young woman. He seems a bit uncertain as to why he is so drawn to the image, but so he is, and his amused friends cannot blame him. Sometimes the woman's portrait in the film noir acts as a gateway drug to the dark side, where an inexorable downward spiral ensues. That is the underlying theme of this finely crafted noir work from 1944, one of the most important years of the genre, frontloaded with such gems as DOUBLE INDEMNITY, MURDER MY SWEET, LAURA and PHANTOM LADY.

Over alcoholic beverages that surely influence the story to come, Richard converses with pals District Attorney Frank Lalor (Raymond Massey) and Dr. Michael Barkstane (Edmund Breon). The three men lament the aging process and its associated limitations, especially in terms of the pleasures of younger women. Frank opines, "We're like athletes who are out of condition. We can't handle that sort of thing anymore." After his comrades retire for the evening, Richard opens the book THE SONG OF SONGS WHICH IS SOLOMON'S, a celebration of unbridled love between man and woman. Later that evening, Richard cannot resist the magnetic pull next door of the portrait he found so evocative of female charms. Such framed perfection in the film noir almost always hints at a woman not easily contained or understood, as is the lesson of the same year's LAURA. With his second viewing of the framed beauty, this time Richard is stunned to notice the manifestation of the actual countenance of the model who posed for the oil painting. That woman is Alice Reed (Joan Bennett), and without a doubt she is better looking than the painting. Despite all the admiration in the world for her classic looks, Richard has so little idea how to proceed that Alice picks him up, not the other way. That is the major tip-off we are watching a male fantasy unfold, where a reluctant man is targeted by an attractive younger female. 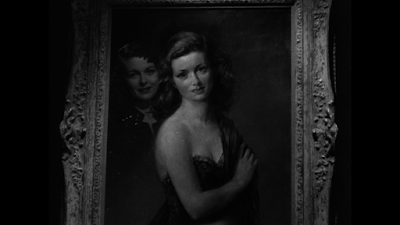 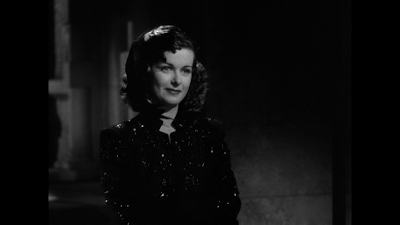 A creature of the night, Alice does not consider 11 PM late, as Richard does. A drink at a bar soon leads to her apartment, where she promises more artwork that depicts her. What neither of them foresee is an impromptu visit from Alice's brutish sugar daddy Frank (Arthur Loft), whose arrival is accompanied by heavy rainfall, a recurring backdrop of uncertainty in the noir film. Frank promptly attacks the man he sees as his rival, and Richard defends himself with a pair of scissors provided by Alice. The net-net is a sizable dead body and an awfully tough situation for Richard and Alice to consider. The sudden problem of a corpse in an apartment building catapults the unlikely couple deep into the unforgiving film noir orbit. Richard ever so briefly considers notifying the police, but it is not long before he makes his debut in the body disposal business while a thunderstorm rages in the background. As Richard drives off into the night with a lifeless body to dump, there is a cut to a fascinating composition of Alice, who observes from her apartment window. Completely washed away is the romanticized version of Alice depicted in the painting. Now an accessory to murder, her replacement image is obscured by rainfall and contradicts what her idealized likeness had suggested early in the film. 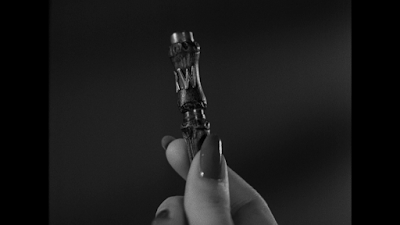 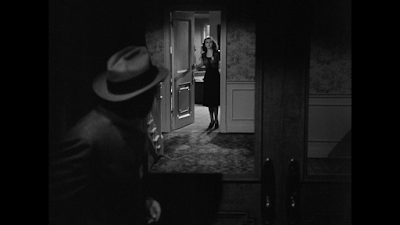 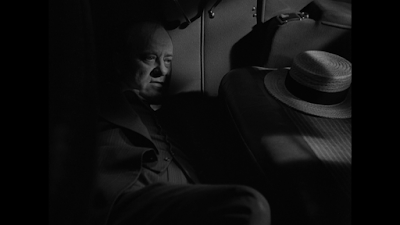 Without much delay, the discarded body of Alice's benefactor is discovered by a Boy Scout (George "Spanky" McFarland). The case captures the interest of Richard's friend the D.A., who soon connects with Inspector Jackson (Thomas E. Jackson) of the homicide division. What plays out from that point only can be described as the worst imaginable predicament for Richard, who has little choice but to observe as the case is investigated right in front of him! Essentially the same thing happens to Walter Neff (Fred MacMurray) in DOUBLE INDEMNITY, with hard-boiled claims investigator Barton Keyes (Robinson) unaware for much of his search how close he already is to the offender. The shoe is on the other foot here, as THE WOMAN IN THE WINDOW casts Robinson in the role of the man under scrutiny who looks more guilty with every passing minute.

Despite an ending that smacks of Production Code compliance, THE WOMAN IN THE WINDOW encapsulates standard film noir themes throughout its mostly nightmarish narrative. The film takes a hard line on men who contemplate a life outside of traditional family values. From the early going, the many temptations that test Richard revolve around his absent family. Without his wife and children home to keep him honest, Richard drinks more than usual and stays out later than what would be typical, which leads to a one-on-one situation with an enticing woman. Fate often brings a heavy hand down on such errant men in the film noir, where self-assured, sexy women like Alice are best kept at a distance. Another enormous red flag and noir trope is Alice's mysterious man with multiple identities (Frank Howard / Claude Mazard). One thing swiftly leads to another in Richard's parabolic decline, as advanced police investigation techniques all but assure his eventual arrest and conviction. Beyond THE WOMAN IN THE WINDOW and its progenitor DOUBLE INDEMNITY, other film noirs in which a man must watch his own crime case gradually solved include WHERE THE SIDEWALK ENDS (1950) and SCANDAL SHEET (1952). The template is well suited to the noir genre, where the protagonist's sense of paranoia is seldom without validity. 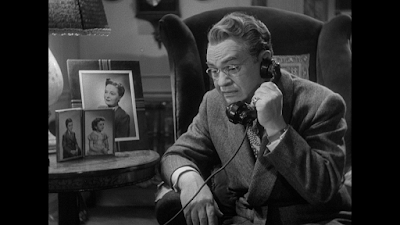 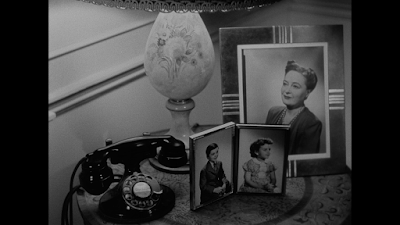 Set in New York, though filmed mostly on soundstages, THE WOMAN IN THE WINDOW was written for the screen by producer Nunnally Johnson, who adapted the best-selling novel ONCE OFF GUARD (1942) by J.H. Wallis. Johnson had founded his own independent production company International Pictures, and THE WOMAN IN THE WINDOW became its top priority. The already incredibly accomplished director Fritz Lang was the filmmaker behind M (1931), perhaps the very first film noir, and absolutely one of the most influential. This time out Lang gets plenty out of his leads Robinson and Bennett, and superb supporting work from Dan Duryea as Heidt, the dirty ex-cop wise to Alice. The screen chemistry between Bennett and Duryea is sensational, and would continue in Lang's subsequent noir masterpiece SCARLET STREET (1945), which reteamed Robinson, Bennett and Duryea, as well as talented cinematographer Milton R. Krasner. Besides their common contributors and some shared plot points, both THE WOMAN IN THE WINDOW and SCARLET STREET revolve around portraits that come to life (in SCARLET STREET it happens twice, first literally then figuratively). LUX RADIO THEATER produced a 60 minute radio adaptation of THE WOMAN IN THE WINDOW on June 25, 1945. Robinson, Bennett, and Duryea assumed their film roles. 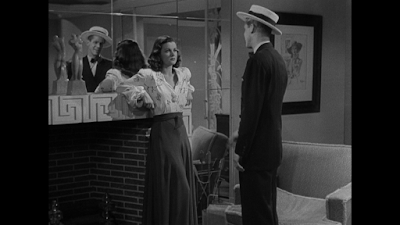 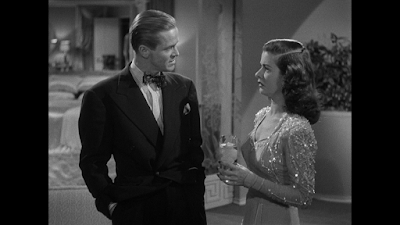 Remastered in HD and framed at 1.34:1, the new Kino Lorber single-layered Blu-ray edition of THE WOMAN IN THE WINDOW vastly improves upon the screen output generated by the MGM Home Video DVD released back in 2007. Though an obvious upgrade, this new presentation does fall a little short of perfection. Gatefloat can be a little nagging, various vertical scratches are apparent, and damaged film elements are intrusive at times (especially at 19m 43s).


The newly recorded audio commentary track features film historian Imogen Sara Smith, author of IN LONELY PLACES: FILM NOIR BEYOND THE CITY (2011). Smith labels THE WOMAN IN THE WINDOW among the first of the new type of crime thriller French critics would deem film noir. Though many have derided the ending that recalls THE WIZARD OF OZ (1939), she builds a solid case for the conclusion in a Freudian sense. If a man even fantasizes about an affair with a beautiful woman, he subconsciously believes he must be punished, thus desire and fear are inseparable. Especially upon repeat viewings, the ending fits perfectly well given the events that lead to it. The sequence in which Alice suddenly springs to life from her portrait is the stuff of dreams, not reality. The same goes for her attraction to Richard, which even for the movies stretches plausibility. Smith also notes the repeated use of reflected images that suggest an alternate reality. Another good point from Smith is that Alice is not a pure femme fatale, since she does not deliberately set out to destroy men. The classic femme fatale appears weak only to prove strong later, i.e. Phyllis Dietrichson (Barbara Stanwyck) from DOUBLE INDEMNITY.

In a discussion that dovetails with the Me Too movement, Smith confirms Fritz Lang was one of numerous abusive directors of the studio system era. He would be particularly tough on those who could not defend themselves, but would be less domineering over stars who maintained clout with studio brass. Smith also recounts the scandal that crushed Bennett's career like a steamroller. On the afternoon of December 13, 1951, Bennett's agent Jennings Lang was shot twice (below the waist!) by Bennett's husband Walter Wanger, who suspected his wife was having an affair with her business associate. Wanger served a mere four-month sentence for his crime, and then returned to a successful career as a movie producer. Though she denied any romantic involvement with her agent, Bennett found roles hard to come by after the incident, which sadly suggests implied adultery is worse than attempted murder. 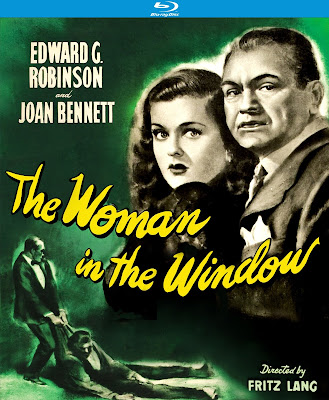