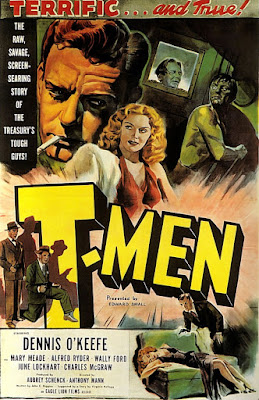 On a budget of $434 thousand, T-MEN raked in $2 million at the box office to become the most commercially successful release from Eagle-Lion Films, one of the finest of Hollywood's "Poverty Row" studios. The B film also was received well critically, and was the subject of a feature by LIFE. With the persistent narration that was typical of the noir docudrama approach, T-MEN covers the Shanghai Paper Case, a fictitious investigation based on an amalgam of actual cases.

The story involves a complex counterfeiting web pursued by the U.S. Department of the Treasury, a federal arm created in 1789, as confirmed in an introductory segment built around Elmer Lincoln Irey. As Chief of the Treasury Department's Internal Revenue Service Enforcement Branch, Irey led the charge against Al Capone's Chicago Outfit. According to Irey, whose presence is intended to lend authenticity to the action about to unfold, various divisions of the U.S. Department of the Treasury have gathered the evidence necessary to convict roughly 2/3 of the prison population. With the government department's credibility firmly established, the men assigned to the counterfeiting case are Dennis O'Brien (Dennis O'Keefe) and Tony Genaro (Alfred Ryder). The investigation has been frustrating, and has hit numerous dead ends along the way. Working under the aliases of Vannie Harrigan (O'Brien) and Tony Galvani (Genaro), the tandem heads to Detroit with plans of being recruited by known racketeer Vantucci (Anton Kosta), who may be connected with the counterfeiting operation. 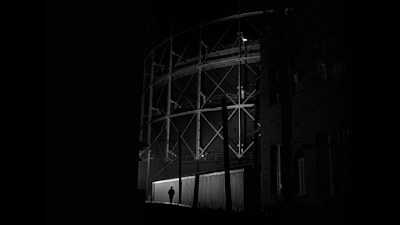 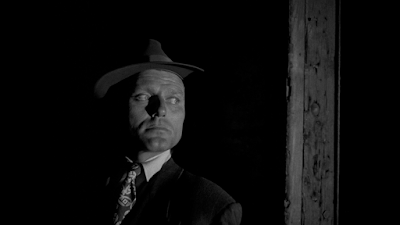 Like most police procedurals, T-MEN depicts an unrelenting law enforcement agency that is organized, well-staffed and incredibly efficient. As written by John C. Higgins, based on the original story by Virginia Kellogg, leadership is determined, agents are resourceful and crime laboratory technicians unearth a vast assortment of information from seemingly trivial clues. The agent's job is one of selfless duty and family sacrifice for a modest salary. Dedicated undercover agents spend countless hours on tedious research and dutiful follow-up on any and all leads ("Every angle, however slight, must be carefully checked."). Both O'Brien and Genaro endure plenty of stress and rough abuse in the line of duty. An agent even is willing to offer his life if necessary in the interest of dismantling a sophisticated organized crime network. The obvious takeaway is that even the slickest of criminals stands no chance versus the meticulous prep work and tenacious determination of the federal law enforcement system. 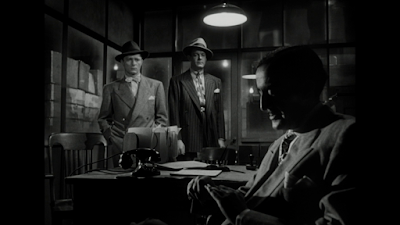 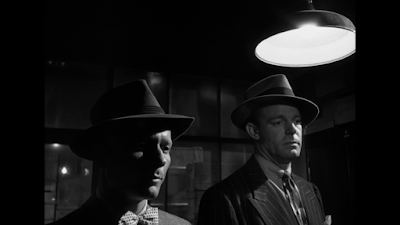 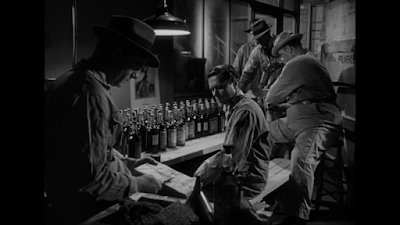 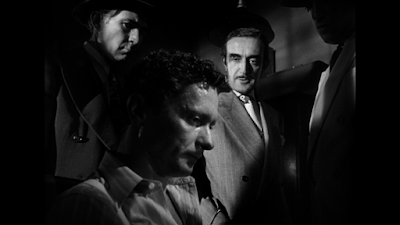 Director of photography John Alton, a name film noir fans should recognize, expertly utilizes high-contrast lighting to accent the danger of dark alleys, crummy apartments and assorted locales where illegal activities take place. He honors the textbook noir visual style of the 1940s in the early going, when an informant named Shorty (Curt Conway) is gunned down before he can provide any information. Other telltale noir settings well captured by Alton include the Club Trinidad, precipitous staircases and those hazy steam rooms, especially when The Schemer (Wallace Ford) dies a painful death while doing something he loved, a noir death if ever there were one. Director Anthony Mann proves his acumen for staging tough-guy sequences, though he forgets where to place his camera when O'Brien obviously pulls his punch at Moxie (Charles McGraw). This was the first official pairing of Mann and Alton, who would team up again for RAW DEAL (1948) and BORDER INCIDENT (1949), both outstanding examples of the noir form. They also worked together on the influential HE WALKED BY NIGHT (1948), though directorial credit was assigned to Alfred L. Werker. Narrator Reed Hadley lent his vocal talents to a considerable sample of noir entries, such as THE HOUSE ON 92ND STREET (1945), 13 RUE MADELEINE (1946), BOOMERANG! (1947), WALK A CROOKED MILE (1948) and HE WALKED BY NIGHT. And though neither has a large role, appearances by Jane Randolph (CAT PEOPLE [1942]) and Art Smith (IN A LONELY PLACE [1950]) always are appreciated. 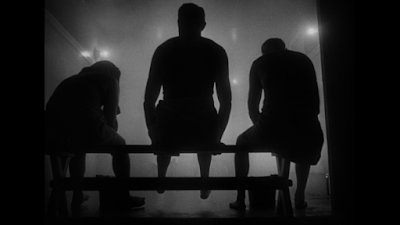 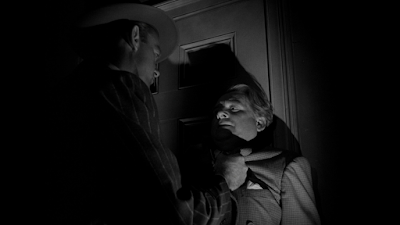 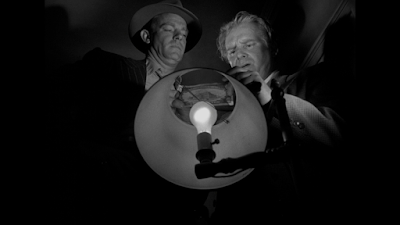 The stunning Blu-ray version of T-MEN now available through boutique label ClassicFlix puts my old Roan Group Archival Entertainment DVD to shame. I did not notice a flaw of any sort in this restored 1080P single-layered Blu-ray edition, faithfully framed at the original theatrical scope of 1.37:1 and complimented by the uncompressed mono soundtrack. Supplemental material starts with a new audio commentary track from film noir historian Alan K. Rode, who notes that T-MEN made its Hollywood premier on Christmas Day(!) in 1947. Rode confirms that director Anthony Mann considered T-MEN his first film, despite his dozen prior directorial credits. T-MEN was the first film over which the director felt he maintained creative responsibility and control. Rode points out some of the various locations that serve as the backdrop, including Ocean Park Pier, Farmers Market (still thriving!) and Sheraton Town House. Rode takes advantage of the many opportunities the film provides to identify noir visual tropes, i.e. low camera angles, the arrangement of actors within the frame, and above all else the magnificent interplay between light and shadow. Each screening of T-MEN creates a deeper impression of just how little light is utilized to create many of the film's most iconic images. My favorite observation from Rode really captures the essence of this film, and the noir movement in general:  "With Alton and Mann in this movie, everyone emerges from the dark into the light." 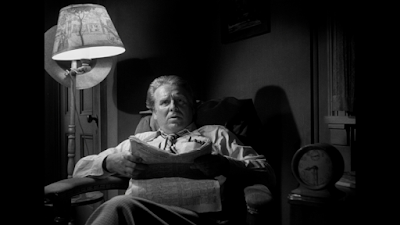 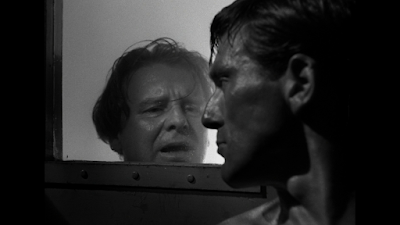 The genre-defining technical achievements of the Alton/Mann combination are examined further in the featurette "Into the Darkness: Mann, Alton and T-MEN" (10m 38s). Testimonials from Rode, THE HOLLYWOOD REPORTER film critic Todd McCarthy, film historian Julie Kirgo, cinematographer Richard Crudo and screenwriter C. Courtney Joyner describe how Alton and Mann set the noir tone with minimalist setups. Their approach was not conventional at the time T-MEN was in production. Alton preferred simple light bulbs to the large overhead light fixtures that illuminated most studio soundstages. Mann was similar-minded when it came to camera positioning; his camera seldom moved other than for the occasional tracking shot of a character. 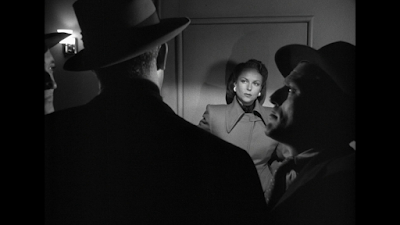 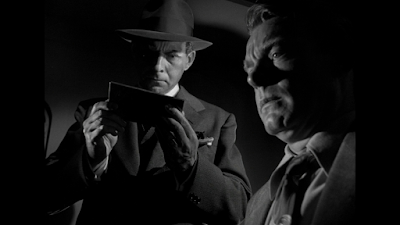 In the interview segment "A Director's Daughter: Nina Mann Remembers" (9m 18s), Mann discusses her father's fascinating filmmaking career in the context of how recurring themes and motifs reflect his background. For her, to watch his films is to explore his life. She claims her father merely thought of himself as a journeyman, not the great artist he is considered today.

Contained within the Blu-ray case is a well-illustrated 24-page booklet with an essay by Max Alvarez, author of THE CRIME FILMS OF ANTHONY MANN (2013). Without question, this ClassicFlix edition of T-MEN is likely to remain the definitive version of the film for a long time. 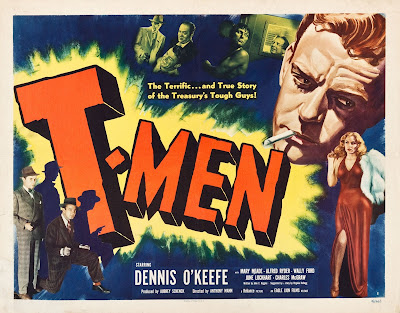 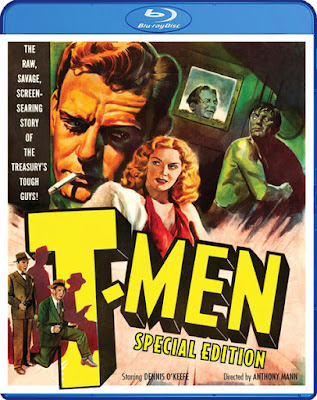