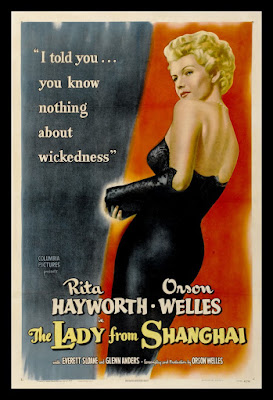 "Everybody is somebody's fool."
—Michael O'Hara

The Orson Welles production THE MAGNIFICENT AMBERSONS (1942), the gifted filmmaker's follow-up to CITIZEN KANE (1941), is well known as one of the most egregious examples of studio interference. The version Welles intended was cut in half, and replacement material was compiled in his absence. To find the "lost" version of THE MAGNIFICENT AMBERSONS would be to unearth the Holy Grail of the classic Hollywood studio system.

Neither CITIZEN KANE nor THE MAGNIFICENT AMBERSONS ignited the box office, and Welles did not fare any better with his "Screen Play and Production," as the opening credits describe, of THE LADY FROM SHANGHAI, another box office bomb. The uncredited director lost final creative control of this one too, and footage excised to appease Columbia boss Harry Cohn is presumed extinct. That leaves the viewer to wonder about the worth of the 155-minute rough cut that alienated test audiences, but unfortunately all one can evaluate is the film that editor Viola Lawrence (IN A LONELY PLACE [1950]) was instructed to trim to under 90 minutes. The final cut does nothing to extinguish the obvious technical proficiency of Welles, but the commercial failure of THE LADY FROM SHANGHAI led Welles to his Hollywood grave until his resurrection with the film noir masterpiece TOUCH OF EVIL (1958) a decade later. Oft cited as noir’s end of the line, TOUCH OF EVIL also was the subject of studio-mandated revisions.

THE LADY FROM SHANGHAI confuses as it unfolds, probably at least in part due to the studio meddling that impacted the finished product. Intended or not, the film's disjointed nature honors the noir tradition perfectly fine, and absolutely encourages repeat viewings. After strapping Irish sailor Michael O'Hara (Welles) heroically rescues Elsa Bannister (Rita Hayworth, GILDA [1946]) from what looks like imminent rape in Central Park, O'Hara is recruited as a yacht hand for Elsa and her successful but crippled lawyer husband Arthur Bannister (Everett Sloane). What begins as a maritime adventure turns darkly noir when Bannister's quirky law partner George Grisby (Glenn Anders, M [1951]) offers O'Hara $5,000 to kill...Grisby! It is explained that by law a letter written by O'Hara admitting to killing and disposing Grisby at sea would be enough to have Grisby declared legally dead, but without a body, there would be no legal means of prosecuting O'Hara. Simple plan! Grisby disappears to live the quiet life, and O'Hara gets $5K to start a new life, so the arrangement is mutually beneficial. Ensuing events do not line up quite as either had envisioned, beginning with the troublesome emergence of shady-looking Sidney Broome (Ted De Corsia, THE KILLING [1956]).

Based on the novel IF I DIE BEFORE I WAKE by Sherwood King, THE LADY FROM SHANGHAI was unleashed theatrically during film noir's deep waters of the late '40s. Its now familiar noir themes are overt and interconnected. From the beginning, O'Hara's narration blames the dangerous female Elsa ("…once I’d seen her, I was not in my right mind for quite some time."). A woman of Russian descent living in Shanghai in the 1930s most likely was a prostitute, a connection lost on O'Hara. Elsa is associated closely with supposed oriental "evil,” she even speaks the language fluently in Chinatown during the film's final act. Close-ups of Hayworth (Welles's estranged wife at the time of filming) were studio-imposed, but Welles presented her in overly-bright circumstances to emphasize her character’s coldness. The drifter O'Hara initially acts as if he doesn't care about money, but he changes his tune when he thinks $5K could get him and Elsa started on the right foot. The famous finale inside the Crazy House is one of the most iconic of film noir experiences. Though O'Hara walks away, whatever he was before he met Elsa no longer exists. He is still thinking about her, and presumably will always be in the Crazy House when it comes to her.

Everett Sloane (JOURNEY INTO FEAR [1943], THE ENFORCER [1951]), one of the great supporting players of his time, offers his usual commanding performance as Bannister. Though much is made of Bannister's perfect record as a trial lawyer, he's more victimized than O'Hara by the film's conclusion. His character embodies the common noir theme of crippled masculinity; Bannister hobbles around with two walking canes and hardly seems the sexual match for Elsa.

The Bannister marriage is characterized by a complete lack of fulfillment; Elsa even admits she has contemplated suicide. In a related scene, O'Hara tells a fishing story about a hooked shark that started a feeding frenzy. Once blood was in the water, all sharks in the area fed on each other until none of them remained. He suggests the Bannisters and Grisby are a notch lower. This theme is reinforced by the presence of aggressive aquatic reptiles during a canoe trip in tropical Mexico, and especially by some unfriendly-looking sea creatures that surround O'Hara and Elsa at an aquarium.

From New York to San Francisco by way of the Panama Canal, THE LADY FROM SHANGHAI's extensive location footage, which includes Acapulco, Sausalito, and Chinatown, San Francisco, is impressive. Charles Lawton Jr. was not a notable cinematographer of noir productions, a shame considering the chiaroscuro compositions of interest here. He would serve as director of photography for two terrific Westerns directed by Delmer Daves:  JUBAL (1956) and 3:10 TO YUMA (1957). The demands of filming THE LADY FROM SHANGHAI took a toll on personnel. Rudolph Maté (FOREIGN CORRESPONDENT [1940], GILDA) shot portions of the film while Lawton Jr. was sick, and assistant cameraman Donald Ray Cory suffered a fatal heart attack while on location in Acapulco.

The recently released Turner Classic Movies Vault Collection Blu-ray/DVD combo pack available via shop.tcm.com is the result of a partnership with The Film Foundation, Turner Classic Movies and Sony Pictures Home Entertainment. A new 4K digital restoration from the original negative returns the film to its original theatrical framing of 1.37:1. This beautiful new transfer is void of the artifacts apparent on the Columbia TriStar Home Video DVD from 2000 and offers noticeably more on the left side of the frame than the Columbia release, which cropped the film to 1.33:1.

Ported from the Columbia DVD is the commentary track by Peter Bogdanovich, author of THE CINEMA OF ORSON WELLES (1961) and THIS IS ORSON WELLES (1992), the latter published seven years after the death of Welles. Bogdanovich covers a lot of ground by reading interview excerpts from the second book, and he confirms the money problems long associated with Welles. Based on the success of THE STRANGER (1946) and the stardom of his wife, Welles secured $50,000 from Cohn in an agreement to make THE LADY FROM SHANGHAI, but that stipend was consumed instantly to pay debts Welles accumulated producing the stage musical AROUND THE WORLD. Welles abhorred THE LADY FROM SHANGHAI's score composed by Heinz Roemheld, who Welles believed resorted too frequently to variations on the song "Please Don't Kiss Me" by Allan Roberts and Doris Fisher. Bogdanovich stresses that Welles thrived on the unpredictable nature of location shooting and the challenges that invariably would arise, which puts the Welles approach in diametric opposition to the creative process preferred by Alfred Hitchcock.

Further supplements, mostly unique to this release, include an introduction by Turner Classic Movies host and film historian Robert Osborne, publicity stills, scene stills, behind-the-scenes photos, movie posters, lobby cards, a TCMDb article by Roger Fristoe, and a Welles biography by Fristoe. A good listen is the informative podcast (30m 2s) originally broadcast in 2006 as part of the OUT OF THE PAST:  INVESTIGATING FILM NOIR series by Shannon Clute and Richard Edwards, co-authors of the book THE MALTESE TOUCH OF EVIL:  FILM NOIR AND POTENTIAL CRITICISM (2011).

Email ThisBlogThis!Share to TwitterShare to FacebookShare to Pinterest
Labels: LADY FROM SHANGHAI (1947) 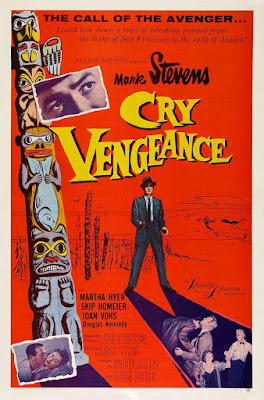 Free from San Quentin after serving a three-year stretch, unfairly discredited cop Vic Barron (Mark Stevens) is after Tino Morelli (Douglas Kennedy, DARK PASSAGE [1947]), a former San Francisco-based racketeer. Barron believes Morelli is responsible for planting the automobile bomb meant for Barron that claimed his wife and young daughter instead. The explosion left Barron with a horrible scar on the right side of his face. Morelli now resides in Alaska under a new identity with his daughter Marie (Cheryl Callaway, THE LINEUP [1958]). Current San Fran crime boss Nick Buda (Lewis Martin) knows all the details about what really happened to Barron, and advises his somewhat effeminate heavy Roxey Davis (Skip Homeier, BLACK WIDOW [1954]) to eliminate Morelli and let Barron take the rap in a sort of two-for-one deal.

Though former colleagues Red Miller (John Doucette) and Lt. Pat Ryan (Don Haggerty) warn Barron to forget the past, the extremely tough customer Barron is obsessed with revenge, as the film's title implies. He is among the most single-minded and stone-faced of all "loner" noir protagonists, determined to get even with the man he believes destroyed his family. His short temper goes off again and again; he beats up Davis (twice), punches out Miller, chokes out and later knocks out Johnny (Mort Mills), and roughs up local cop Mike Walters (Warren Douglas). In a chilling scene, Barron offers the child Marie a bullet for her marked father.

If some of this sounds familiar, the screenplay by Warren Douglas and George Bricker owes something to the prior year's THE BIG HEAT (1953):  a car bomb killing loved ones, a burned countenance that emphasizes conflicting personalities, the Lee Marvin-like presence of Homeier, and the Gloria Grahame type Lily Arnold (Joan Vohs), a sexy lush who consistently complicates the agendas of the hoods in her life.

Arnold nicely summarizes the existential noir universe of indifference and creeping mortality that is heightened in the criminal underworld, "One way or the other we're all on a merry-go-round...None of us can get off 'til they push us off..." The displaced figure Barron later echoes this sentiment, "Maybe I don't belong anywhere." And try as he might, Morelli cannot escape his criminal past, even though in truth he is innocent of the specific crime for which Barron wants to hold him accountable. CRY VENGEANCE offers some optimism with its conclusion, which suggests a new beginning for Barron with tavern owner Peg Harding (Martha Hyer, DOWN THREE DARK STREETS [1954]), but the overall tone is downbeat, per usual for the noir form. 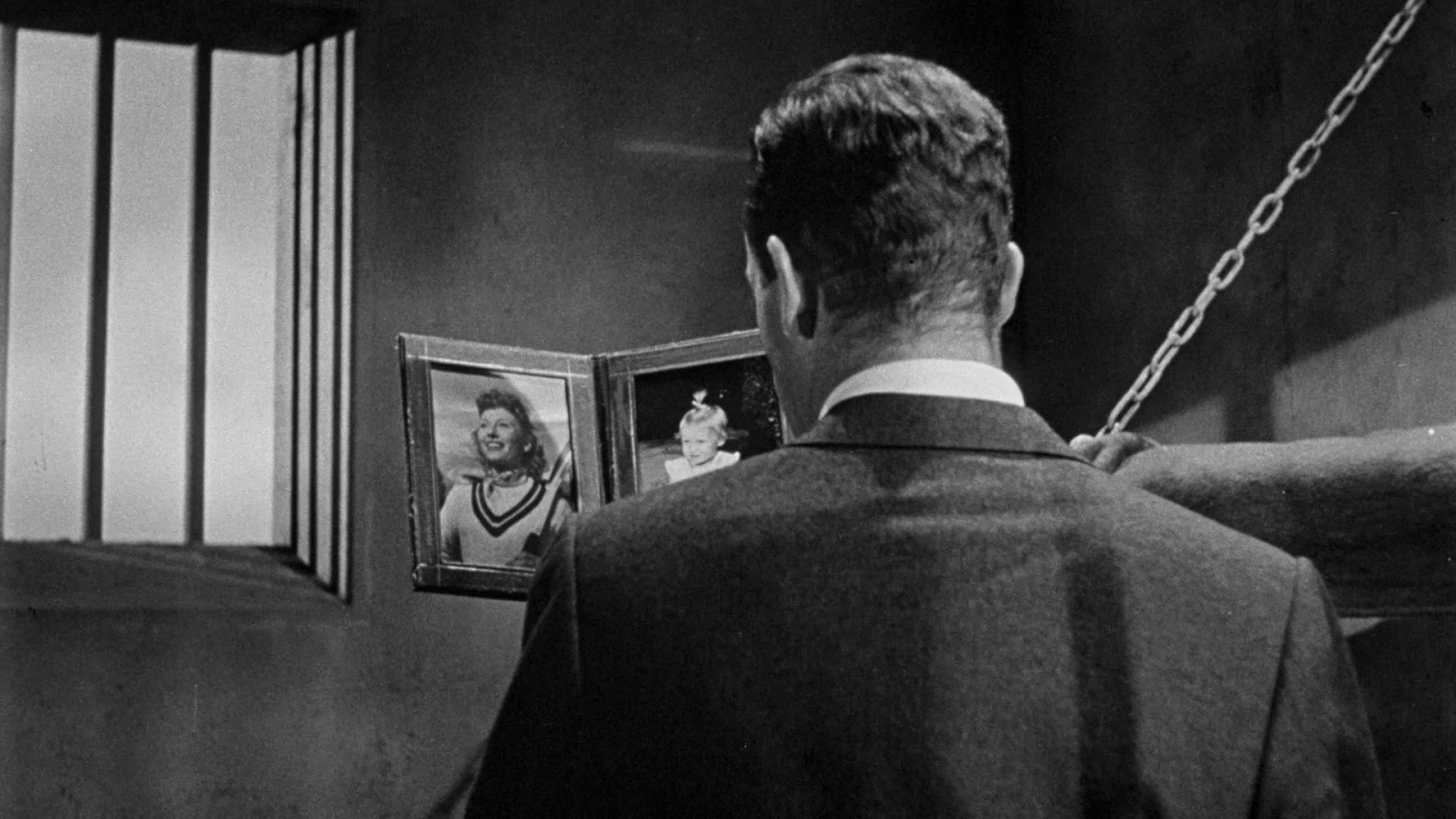 This is the first feature film directed by Mark Stevens, who appeared in the classic Fox noir vehicles THE DARK CORNER (1946) and THE STREET WITH NO NAME (1948). With its impressive location footage around San Francisco and especially Ketchikan, Alaska, where much of the action unfolds, consider CRY VENGEANCE a "great outdoors" noir in the vein of ON DANGEROUS GROUND (1951) and NIGHTFALL (1957). Cinemtography was handled by William A. Sickner (LOOPHOLE [1954], FINGER MAN [1955]).

The Blu-ray available from Olive Films is framed at 1.78:1 and displays only a minimum of artifacts and scratches.
Posted by Eric Somer at 1:42 PM No comments: