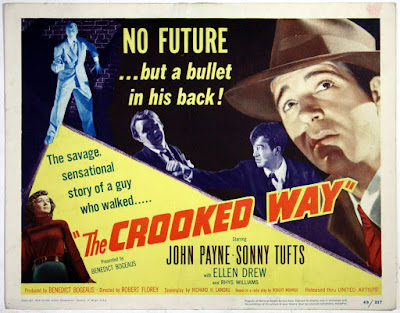 The World War II veteran has a distinctive status in the film noir, where the alienated stand in the spotlight. After having endured often physical and always psychological wounds of war, the returning soldier finds himself surrounded by uncertainty back home. Invariably he somehow remains at war in a society that has moved forward in his absence, though not necessarily for the better.

THE CROOKED WAY begins in San Francisco within a health care center for veterans. The patient of the narrative's focus is 34-year-old Eddie Rice (John Payne), who served in the US Army during WWII. He earned a Silver Star for bravery overseas, but also was left with a large piece of shrapnel embedded in his brain. He is told he has organic amnesia, which means his memory loss is permanent. Undeterred, Rice returns to his old LA stomping grounds in a bold attempt to discover the man he was. He does not have to look all that hard to find evidence of his pre-war existence. 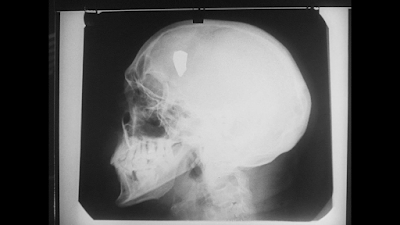 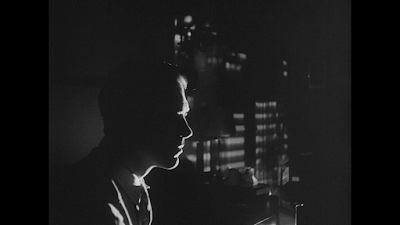 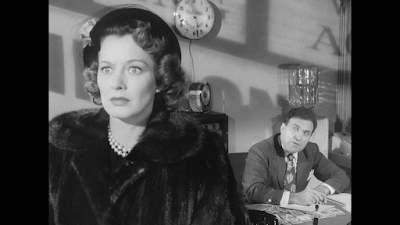 Within minutes of his arrival in LA, Rice is confronted by his criminal past in the form of Lieutenant Joe Williams (Rhys Williams), who sternly warns Rice to get the hell out of town. Rice has other ideas, especially after running into the attractive Nina Martin (Ellen Drew). Besides the obvious dangers of a tough-talking cop and a mysterious brunette, Rice has a crime sheet that connects with underworld lord Vince Alexander (Sonny Tufts), a well-dressed chap with a nervous condition and a penchant for keeping his fingernails neatly trimmed. Alexander owns the two most violent sequences:  the first, extremely well-staged, involves an ignored phone call as a snitch (John Harmon) gets grilled, the second sends our embattled lead protagonist tumbling down a fire escape.

As Rice explores the maze of his former life, it becomes clear that past betrayals and shady acquaintances are not easy to leave behind, or discover. As one character describes Rice, "A Silver Star and a dumb look doesn't change a no-good heel." In one of my favorite crime film traditions that has its roots in the Fritz Lang German Expressionism classic M (1931), Rice is sought by both policemen and criminal forces. The past seems to deny him a present as the amnesia case struggles for a second chance in a post-war society seemingly defined by the science of determined police procedure. 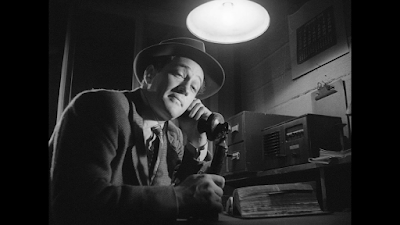 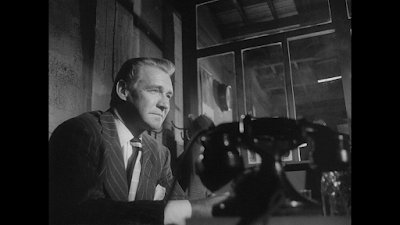 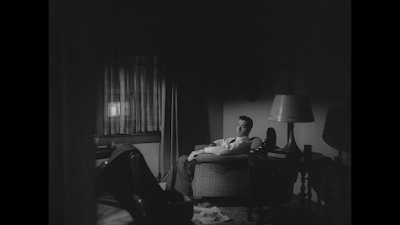 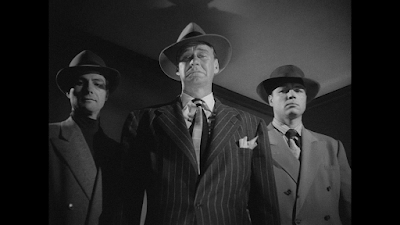 The setup of THE CROOKED WAY is predated by the less visually stylish but highly effective SOMEWHERE IN THE NIGHT (1946), directed and co-written by Joseph L. Mankiewicz (HOUSE OF STRANGERS [1949], NO WAY OUT [1950]). The rather labyrinthine SOMEWHERE IN THE NIGHT provided the major narrative structure for the film under review, with amnesiac war veteran George W. Taylor (John Hodiak) combing the Los Angeles streets, "...where everyone's a stranger." Like the Taylor character, in his identity search Eddie Rice essentially assumes the role of the hard-boiled private investigator featured in such film noir classics as THE MALTESE FALCON (1941), MURDER, MY SWEET (1944) and THE BIG SLEEP (1946).

A far easier film to follow than its source of inspiration, THE CROOKED WAY was directed by Robert Florey, who also helmed THE BEAST WITH FIVE FINGERS (1946), but is perhaps best known for his uncredited contribution to Universal's FRANKENSTEIN (1931). Richard H. Landau (THE QUATERMASS XPERIMENT [1955], HELL BOUND [1957]) wrote the screenplay, an adaptation of the radio play "No Blade Too Sharp" by Robert Monroe. Payne is fine in the lead as the disoriented veteran, but I prefer his tougher characterizations that energize 99 RIVER STREET (1953) and HIDDEN FEAR (1957). Perpetually coughing milquetoast Petey (Percy Helton) is a terrific noir oddity, inclined to cower in front of all authority figures. The superb cinematography that elevates THE CROOKED WAY above routine genre fare was handled by John Alton, a name all film noir fans should be familiar with for his masterful contrast between light and shadows. His compositions commonly are fraught with tension, as they were in the same year's BORDER INCIDENT and the prior year's HE WALKED BY NIGHT. 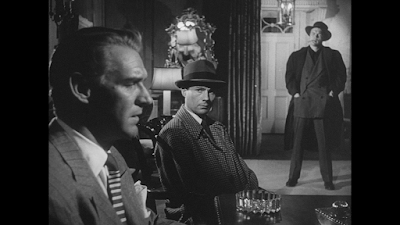 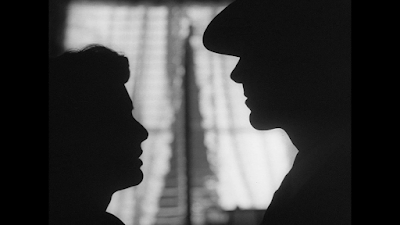 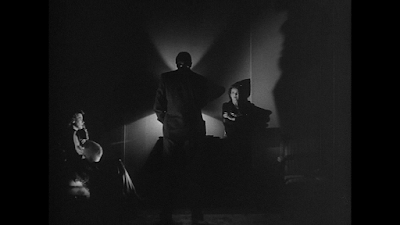 Newly re-mastered in HD, this single-layered Blu-ray edition available from Kino Lorber provides an acceptable presentation, though the lack of restorative work is evident by way of stubborn scratches. Rest assured the wear and tear hardly detracts from this very competent production. The disc is essentially featureless, save for a few trailers. 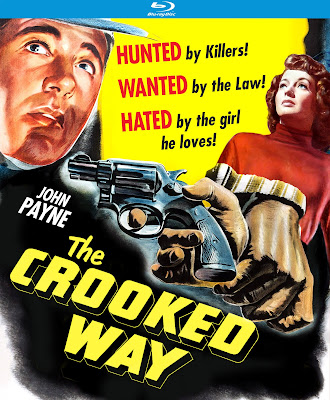 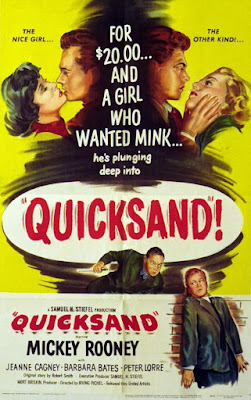 A good little B-picture, QUICKSAND packs a lot of action into its modest duration. Set in Santa Monica, California, local mechanic Dan Brady (Mickey Rooney) takes an immediate interest in Vera (Jeanne Cagney) when he eyes her at a greasy spoon. But in a telling sign of the financial dislocation to come, Dan is short of cash before their first date. No matter, he already has fallen for Vera, a streetwise blonde dressed in black, and has grown bored with the perfectly nice but too-available Helen (Barbara Bates). Essentially a parable about womanizing and materialism, QUICKSAND suggests how disastrously trouble can escalate for those who attempt to live beyond their means.

In determined pursuit of Vera, the Navy veteran Dan clandestinely authorizes his own cash advance from the register of his tightwad employer Mr. Mackey (Art Smith). That shortsighted decision has a domino effect when Dan realizes he has less time than he thought to return the funds. Without any better options, he buys a watch on credit and quickly hocks it for a fraction of its value. That takes care of the cash register balance, but then Moriarity (John Gallaudet) informs Dan he is obligated to pay his debt on the wristwatch within 24 hours since he sold it before he technically owned it. 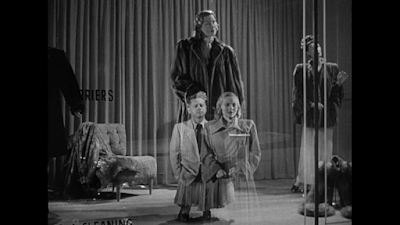 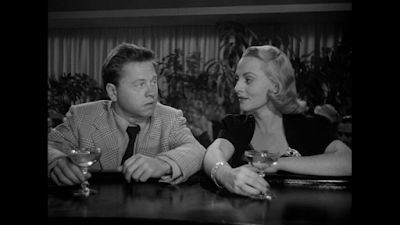 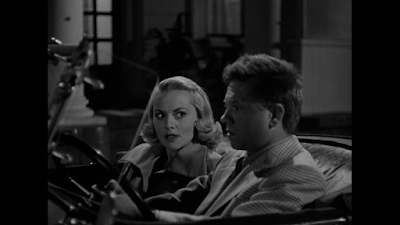 Is Vera worth all this trouble? "I can handle you easy," she mentions to Dan, who clearly is not up to the task of handling her. The better he gets to know Vera, the higher Dan's criminal credentials rise. Dan goes from petty theft to armed robbery, grand larceny, breaking and entering, kidnapping, and—possibly—second-degree murder. In the process, it becomes apparent Vera has a past with numerous pairs of pants in the area. Despised by her landlady (Minerva Urecal), the blonde prize is really the neighborhood tramp, devoted only to the man who might be able to buy her a ridiculously expensive mink coat. Vera is hardly the only character of low morality, though; some who learn of Danny's crimes would rather blackmail him than involve the police. After narrowly escaping the path of a bullet, Danny delivers the token noir line of existential recognition:  "I feel like I'm being shoved into a corner and if I don't get out soon it'll be too late. Maybe it's too late already." Bradford Galt (Mark Stevens) uttered a very similar line in THE DARK CORNER (1946).

QUICKSAND's location work is plentiful, the best of which was captured around Santa Monica Pier. With its games of chance and pierside location, the penny arcade makes for an appropriate film noir setting, especially at night, and particularly since the proprietor is portrayed by Peter Lorre. The cast in general is terrific, with Rooney in great form against type in the lead role. He also co-financed the film with Lorre. I never know what to make of Jeanne Cagney. At times she looks so much like her famous brother James it is difficult to think about her as an individual. In an uncredited role, the instantly recognizable Jack Elam appears briefly, and just where one would expect to find him.

It is especially great to see Art Smith (IN A LONELY PLACE [1950]), who was among those blacklisted after being named by filmmaker Elia Kazan before the House Committee on Un-American Activities in 1952. As for QUICKSAND director Irving Pichel, he was among the "Hollywood Nineteen" who were subpoenaed but chose not to testify. Pichel also was blacklisted and had to continue his career outside the country before he died in 1954 due to a heart ailment. 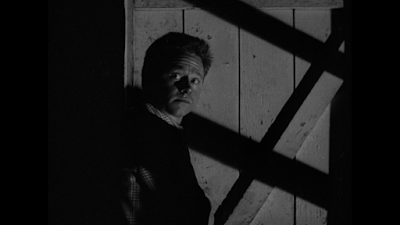 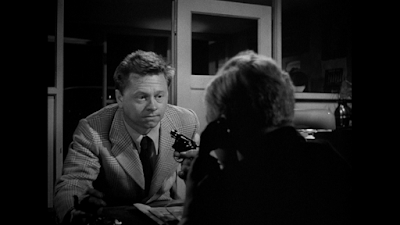 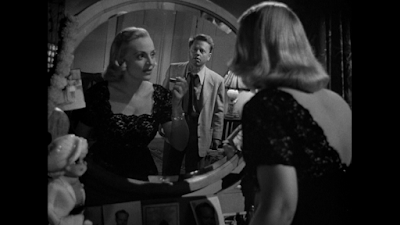 The above screen captures were taken from the DVD version released by Image Entertainment way back in 2000. Since the source material was in decent condition, the featureless disc holds up just fine today.
Posted by Eric Somer at 10:19 AM 2 comments: