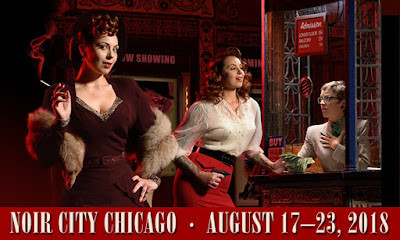 Host Eddie Muller introduced CONFLICT and ESCAPE IN THE FOG yesterday afternoon to kick off the weekend of film noir titles at NOIR CITY: CHICAGO 2018. This year's theme is the reinstatement of the double feature, which means a proper A title is followed by a B selection. 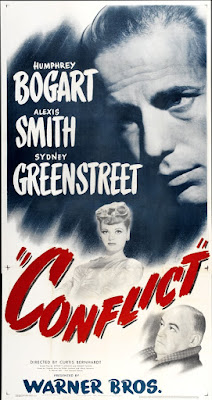 Filmed in 1943, though released theatrically in June of 1945 due to an original story rights dispute, the formative film noir CONFLICT falls somewhere between the genre's emergence and its classic cycle. In what would soon become a noir cliché (if it had not already), the opening credits are accompanied by rainfall. Five years of marriage have taken a toll on Richard Mason (Humphrey Bogart) and Kathryn Mason (Rose Hobart), who bicker in the opening segment. Kathryn accuses her husband of having a thing for her attractive younger sister Evelyn Turner (Alexis Smith), and Richard quickly agrees! After an evening hosted by family friend Dr. Mark Hamilton (Sydney Greenstreet), a talkative headshrinker, Richard gets into a car accident with both sisters aboard. The women fare better than Richard, who is left with a leg fracture after a surreal dream sequence fertilizes his darkest impulses.

Marital discord strikes a sour note in some of the most famous of film noirs, such as DOUBLE INDEMNITY (1944), MILDRED PIERCE (1945) and SCARLET STREET (1945), to name just several. The presence of the crippled man—Richard in this case—is an important interrelated motif. Wheelchairs, canes and crutches assist such men who cannot or will not find a healthy release for sexual energy. The car crash coincides with a trip inside Richard's warped mind and marks a major turning point with no way back. His internal conflicts become externalized, and the wife he no longer loves will not be in the way much longer, or so he thinks.

The application of psychoanalysis would become a fixture of 1940s Hollywood cinema, and was particularly prevalent in the noir production, with its focus so often on the mental anguish of its lead protagonist. CONFLICT was among the first noir narratives to exploit the theme, followed by many others such as THE DARK MIRROR (1946), SHOCK (1946), NIGHTMARE ALLEY (1947) and THE DARK PAST (1948). Richard plans the murder of his wife cleverly enough to avoid prosecution through traditional police investigation work, but psychology is used to disorient him, to make an already unstable personality increasingly more brittle. In yet another theme that would work its way into various film noirs, Richard is forced to question whether his wife is really dead or if he is going insane. Such confusion between the living and the dead is associated more commonly with the horror film, in many ways the noir film's closest cousin. In its resolution, CONFLICT sounds the alarm for the union of police procedure with psychoanalysis.

Director Curtis Bernhardt would add to his film noir credentials with POSSESSED (1947) and HIGH WALL (1947). Cinematographer Merritt B. Gerstad had shot THE UNKNOWN (1927), a fantastic silent horror film. The screenplay was written by Arthur T. Horman and Dwight Taylor. Source material is credited to the original story THE PENTACLE by Robert Siodmak and Alfred Neumann. Humphrey Bogart would return to similar grounds in THE TWO MRS. CARROLLS (1947), where he again would portray a man who prefers the Alexis Smith character over his wife. 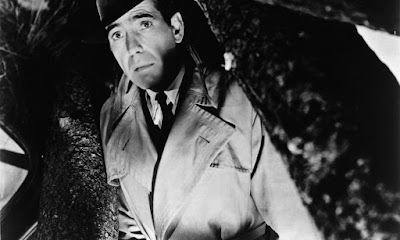 CONFLICT is available on DVD via Warner Archive and should be added to all film noir collections. 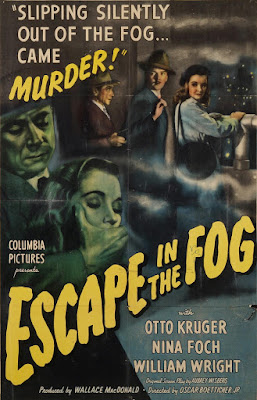 The B portion of the double feature was ESCAPE IN THE FOG, released the same year as CONFLICT, but without the heavy dose of film noir themes and motifs to be found in its A partner. The bottom half of the double feature is a forgettable espionage thriller, with too many improbabilities for its own good. It is mainly notable for being an early directorial effort from Budd Boetticher (credited here as Oscar Boetticher Jr.). Boetticher would helm a couple of proper noirs in the future:  BEHIND LOCKED DOORS (1948) and THE KILLER IS LOOSE (1956). By his own admission, ESCAPE IN THE FOG is evidence of a filmmaker learning his trade on the job.

As our host Muller pointed out, screenwriter Aubrey Wisberg had a knack for grinding out wartime B scripts, with credits that include THEY CAME TO BLOW UP AMERICA (1943), U-BOAT PRISONER (1944) and BETRAYAL FROM THE EAST (1945). Lead actress Nina Foch would grace us with her presence in some of the better film noirs of the decade:  MY NAME IS JULIA ROSS (1945), JOHNNY O'CLOCK (1947) and THE DARK PAST (1948). Top-billed Otto Kruger (SABOTEUR [1942]) has precious little screen time. Shelley Winters jumps out at the viewer in an early uncredited role as a cab driver. 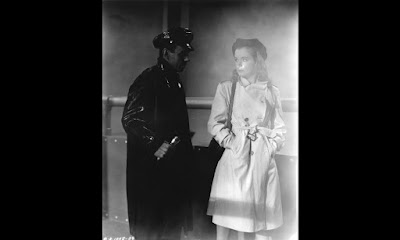 ESCAPE IN THE FOG is available on DVD from Sony Pictures.
Posted by Eric Somer at 1:34 PM

Email ThisBlogThis!Share to TwitterShare to FacebookShare to Pinterest
Labels: CONFLICT (1945), ESCAPE IN THE FOG (1945)