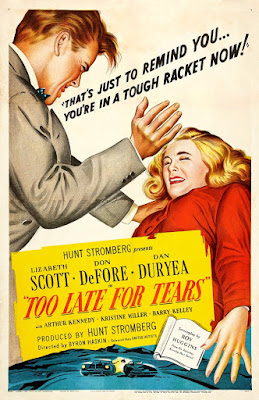 Last night NOIR CITY 6 got started properly with the Film Noir Foundation's new 35mm restoration of TOO LATE FOR TEARS (1949, United Artists, 99m), pieced together from three different sources over a 5-year(!) period according to film historian and festival host Alan K. Rode.

Even for a film noir femme fatale, Jane Palmer (Lizabeth Scott) is exceptionally venomous. She and her husband Alan (Arthur Kennedy) get possession of a sizeable satchel of money, which makes Alan nervous from the get-go. But Jane thinks her prayers have been answered, and will do absolutely anything to keep the money. Another claimant to the cash emerges, tough guy Danny Fuller (Dan Duryea), who does not hesitate to get rough with Jane when she proves uncooperative. Danny is used to having the upper hand with women, it seems, but it is not long before Jane starts to effectively manipulate him, as she does everyone else. She's so single-mindedly greedy and vicious even Danny can't believe it; his final look at her says it all. 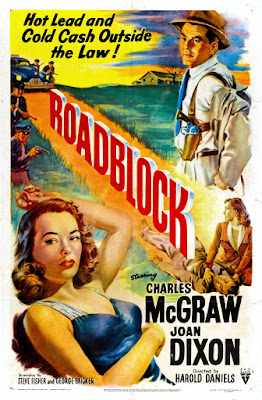 Working from a screenplay by Roy Huggins (THE FUGITIVE [1963–1967], THE ROCKFORD FILES [1974–1980]), director Byron Haskin (I WALK ALONE [1947]) subtly drags the viewer uncomfortably close to the violent subject matter. TOO LATE FOR TEARS is one of the most complete examples of late '40s-era noir to feature Lizabeth Scott, though Rode noted this is not one of her favorites (the retired actress is still alive, now in her early 90s). This new restoration is not perfect—some artifacts sprout up from time to time—but overall this is a terrific presentation of TOO LATE FOR TEARS, and it was received enthusiastically by last night's large audience. Let's hope this resurrected noir treasure gets the Blu-ray or DVD reissue it so richly deserves.

Next up was a newly-created 35mm print of ROADBLOCK (1951, RKO Radio Pictures, 73m). Directed by Harold Daniels, it's another story with a large quantity of cash at its center, but a more mild brand of femme fatale. Insurance investigator "Honest Joe” Peters (Charles McGraw) earns $350 a month, hardly enough to maintain the interest of a sexy young brunette like Diane (Joan Dixon). Based on some inside information, Joe devises a plan working with local racketeer Kendall Webb (Lowell Gilmore) to secure sufficient funding to provide for Diane's needs. Rather amazingly, Diane does an about face regarding the importance of money. More predictably, it is not possible to cancel the crime operation that has been initiated.

This is a supremely entertaining "downward spiral" B-noir, with McGraw offering his usual assertive performance. The suspense builds to a climactic chase within the concrete confines of the Los Angeles River, a sequence well covered by cinematographer Nicholas Musuraca (CAT PEOPLE [1942], OUT OF THE PAST [1947]). ROADBLOCK is available as a made-to-order DVD via the Warner Archive.

This year's week-long NOIR CITY event has an international flair. Complete information on remaining showtimes can be found here:

For film fans of all kinds, attendance is mandatory.
Posted by Eric Somer at 10:09 AM

Email ThisBlogThis!Share to TwitterShare to FacebookShare to Pinterest
Labels: ROADBLOCK (1951), TOO LATE FOR TEARS (1949)