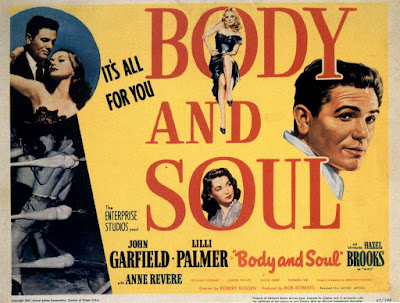 Director Robert Rossen's pessimistic critique of the boxing world influenced almost every boxing film that came after it, and reinforced the dominant themes of the noir films that populated the late 1940s. The primarily urban locales of most film noirs are replete with cheap hotels, smoke-infested night clubs, and rainy streets, so the violence and corruption of the boxing venue furnishes an appropriate setting. The boxing ring of BODY AND SOUL is both actual and allegorical, a battleground that links a brutal profession to an intense social struggle.

The prime examples of film noir often feature a key moment of existential recognition, during which the protagonist realizes he has gotten himself into a real fix, and there is no easy way out. That moment comes early in BODY AND SOUL, when 35-year-old Jewish prizefighter Charley Davis (John Garfield) laments, "All gone down the drain, everything down the drain..." He's been instructed to lose his next title defense, either by decision or quicker if he can live with that. In respect to the lead protagonist's existential awareness, the majority of the storyline plays out in flashback form, tracing the career trajectory of Davis from promising past to problematic present.

Having grown up in a tough ethnic community, the young Davis thinks prizefighting earnings will help his family, but boxing starts to destroy the Davis household even before his first pro fight. Davis's father (Art Smith) is killed almost immediately after providing funding for his son's boxing gear. The somber family matriarch Anna Davis (Anne Revere, FALLEN ANGEL [1945]) persistently suggests schooling as the means for her son to get ahead. She blames the NYC milieu for interfering with her son's potential, "...we live in a jungle, so he can only be a wild animal." Tellingly, Davis becomes committed to professional fighting after seeing his mother being subjected to humiliating questions while seeking financial assistance. So Davis fights for the downtrodden, guided by the assumption that increased cash flow will solve all problems of the have-nots. Davis builds a solid reputation as an up-and-coming pugilist working with neighborhood pal Shorty Polaski (Joseph Pevney, THE STREET WITH NO NAME [1948], THIEVES' HIGHWAY [1949]) and local promoter Quinn (William Conrad, DIAL 1119 [1950], THE RACKET [1951]).

The prospect finds himself trapped in moral quicksand when he makes an agreement with eminently corrupt, big-time promoter Roberts (Lloyd Gough [AKA Goff], TENSION [1949], SUNSET BOULEVARD [1950]). Roberts embodies the darkest corner of the boxing ring, and, by inference, a socialist's worst fears about capitalism. To Roberts, a fighter like Davis represents a revenue stream, nothing more. Roberts is accustomed to getting full cooperation from everyone he works with, particularly when the outcome of his promotion is predetermined. Throwing a fight is just good business as far as the numbers-obsessed Roberts is concerned ("Everything is addition or subtraction."). He understands all businesses have a life and death, and he feels the same way about people, who he callously discards after the end of their useful lives. "Everybody dies" is his catch phrase. On another level, Roberts appears to be one of classic Hollywood's "evil" gay characters. Surely a man of his social status would have a beautiful woman on his arm, unless he had no interest. Then there is the omnipresence of his mysterious silent associate (Peter Virgo, THE NARROW MARGIN [1952]).

Davis puts his career ahead of his fiancée and talented artist Peg Born (Lilli Palmer, CLOAK AND DAGGER [1946]), and eventually his spending leads to financial instability that conflicts with his instincts as a professional athlete. He alienates Peg in favor of Alice (Hazel Brooks in her first credited role), a greedy young beauty whose only interest in Davis involves money, and lots of it. Heavily indebted to Roberts, Davis can get back in the black by betting on himself to lose his title to snarky contender Jackie Marlowe (Artie Dorrell, uncredited). But for the sake of financial gain, Davis also must turn his back on the "whole neighborhood" betting on him to win the toughest defense of his championship. The final fight does not disappoint. Cinematographer James Wong Howe, a former pro boxer himself, inventively captured some of the fight footage with a handheld camera while wearing roller skates. Davis makes the ultimate existential statement when he mocks Roberts at the film's conclusion, and the position of the filmmakers regarding capitalistic greed is confirmed.

After his contract with Warner Brothers ended, in 1946 Garfield co-founded the independent production company Enterprise Productions (AKA The Enterprise Studios) along with producers David L. Loew and Charles Einfeld. BODY AND SOUL was the company's third film. The original boxing film concept conceived by Garfield was a biopic based on the life of boxer Barney Ross (birth name Dov-Ber Rasofsky), a world champion of three weight classes who compiled a record of 74 wins, 4 defeats, and 3 draws. The intent was to cover the area of Ross's life that included drug addiction, a topic that did not fit well into Production Code parameters. Instead, screenwriter Abraham Polonsky devised a fictional boxing narrative that echoes some of the true Ross story.

A box office success, BODY AND SOUL is taut and technically solid as directed by Rossen (JOHNNY O'CLOCK [1947], THE HUSTLER [1961]). Robert Aldrich (KISS ME DEADLY [1955]), THE BIG KNIFE [1955]) served as assistant director. The viewer is likely to recall sequences long after some of the plot points become hazy, always the sign of a great noir film. One of the most sympathetic of all noir characters is Ben Chaplin (real-life prizefighter Canada Lee), a former champion reduced to waterboy status for his successor. Physically Chaplin is a ticking time bomb with a blood clot in his brain. His death sequence, in which he lapses into a bizarre reenactment of his last fight, is among the saddest of noir downfalls.

In 1948 Francis D. Lyon and Robert Parrish won an Academy Award for "Best Film Editing," Garfield and Polonsky both received nominations for their work. Unfortunately, many of the folks involved with this liberal film, including Garfield, Rossen, Polonsky, Revere, Gough, and Lee, would be blacklisted due to the overzealous investigations of the House Un-American Activities Committee. Garfield was only 49 at the time of his death in 1952.

The single-layered, Region "A" Blu-ray disc currently available from Olive Films offers the best presentation of BODY AND SOUL to date. The seminal boxing film was the basis for remakes in 1981 and 1998.
Posted by Eric Somer at 9:21 PM

Email ThisBlogThis!Share to TwitterShare to FacebookShare to Pinterest
Labels: BODY AND SOUL (1947)