(aka THE SCAR, THE MAN WHO MURDERED HIMSELF)
Eagle-Lion Films, 82m 19s 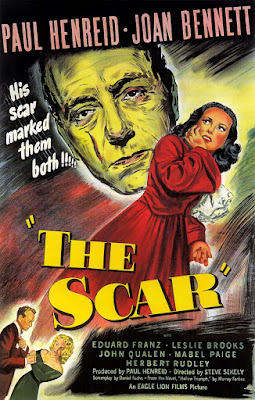 In this case of the boldly ambitious noir criminal, Johnny Muller (Paul Henreid) possesses both street smarts and formal education. Having served some prison time, he is about to crash-land back into mainstream society, where a tedious desk job awaits him in LA. That is not a good fit for Muller, and the warden (Charles Trowbridge) knows it. He tells Muller, "You'll be back here. You're a smart man..." In other words, intelligent guys don't line up for braindead paper-shuffling jobs. As expected, Muller proves anxious to resume his depredations instead. He devises a plan to rob $200K from a casino operated by Rocky Stansyck (Thomas Browne Henry, uncredited). Muller’s old gang is a little ambivalent, especially Marcy (Herbert Rudley), who seems keenly aware of the likely outcome of such an operation.

After a narrow escape from the robbery, Muller finds himself looking over his shoulder. He needs to disappear for awhile, and reluctantly accepts that office job most anyone would detest. But with Stansyck's ruffians closing in, Muller needs to disappear permanently. A convenient option presents itself when Muller learns he has a doppelgänger in psychoanalyst Dr. Victor E. Bartok (also played by Henreid). The only discernible visual difference between the two men is a scar that distinguishes Bartok's countenance. So with the aid of a photograph and a mirror, Muller performs surgery on himself. Disfigured facial features inform a number of film noirs, such as DARK PASSAGE (1947), NORA PRENTISS (1947), THE BIG HEAT (1953) and CRY VENGEANCE (1954). Often scars symbolize some aspect of a personality that no longer exists, but there is more than that going on in HOLLOW TRIUMPH.

The most pure film noirs contain an existential moment of recognition when the lead protagonist realizes everything that could go wrong has gone wrong. HOLLOW TRIUMPH is noted for one of the best instances of this defining noir trope when Muller is stunned to discover he scarred the wrong side of his face! That is about as dark as noir gets; he makes the one mistake possible to make from an appearance emulation standpoint. But the real irony—and there are many in this noir—comes when Muller learns he has become unequivocally accepted as Bartok. The mirror utilized to create Muller's scar provides the clue to what really transpires. Muller transforms into a literal mirror image of Bartok, which implies a difference between the two. As it turns out, that difference merely involves the manner in which each owes something to a casino. Muller's brother Frederick (Eduard Franz) correctly generalizes, "...sooner or later it always catches up with you." 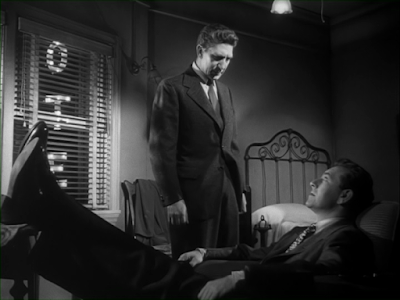 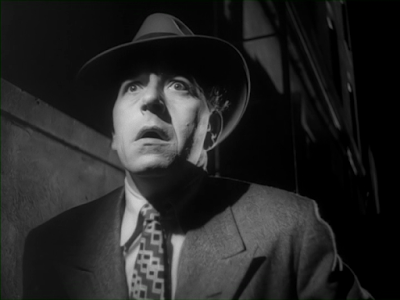 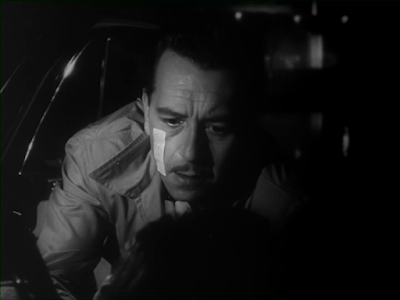 On a level of plausibility, some might consider HOLLOW TRIUMPH unwatchable. Though it is true some of the plot maneuvers may seem preposterous on the surface, the film holds up if observed within the deeper context of the indifferent noir city. The entire narrative is constructed around the notion that city people never look beyond their own personal circles. They are too caught up in their own affairs to be concerned with what is going on with others. The casino heist is engineered around this assumption, as is the substitution of Muller for Bartok. The film's conclusion only emphasizes the individual's sense of alienation within the noir city, as passers-by either do not notice or do not care that a defeated man lies near death. The alienating structure of urban society constitutes the film's “hollow triumph” over the individual.

Director of photography John Alton's contribution to the high-contrast "chiaroscuro" noir look cannot be underestimated. His well-choreographed interplay between darkness and light is persistent throughout this photoplay. In his introduction of HOLLOW TRIUMPH that aired on Turner Classic Movies recently, founder and president of the Film Noir Foundation Eddie Muller noted that Alton often was the highest-paid crew member of each film he worked on, and that includes the respective actors. Alton also handled the cinematography on T-MEN (1947), RAW DEAL (1948), HE WALKED BY NIGHT (1948), THE CROOKED WAY (1949), BORDER INCIDENT (1949), MYSTERY STREET (1950) and one of the greatest film noirs ever, THE BIG COMBO (1955). 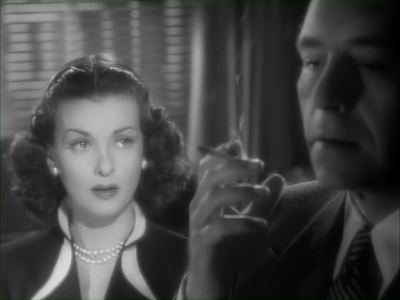 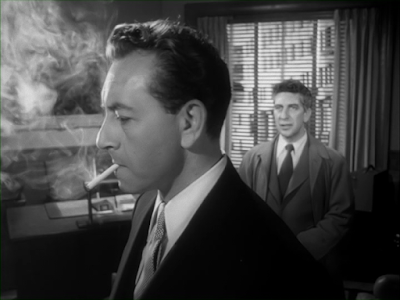 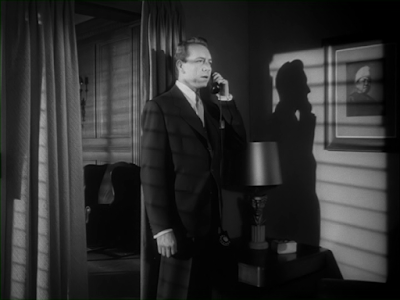 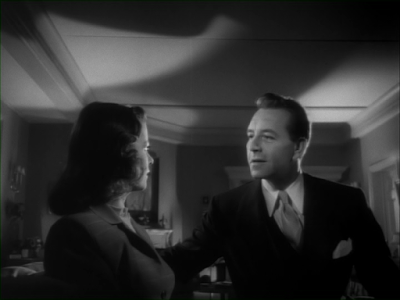 HOLLOW TRIUMPH was based on the novel by Murray Forbes, adapted for the screen by Daniel Fuchs (CRISS CROSS [1949], PANIC IN THE STREETS [1950]). Director Steve Sekely also helmed the cult sci-fi film THE DAY OF THE TRIFFIDS (1963). Joan Bennett always strengthens any film she appears in, and her Evelyn Hahn delivers an oft-quoted line of noir dialog in this one:  "It's a bitter little world full of sad surprises and you don’t go around letting people hurt you." If Herbert Rudley looks familiar to noir fans, he is absolutely unforgettable as a walking dead man in the early moments of DECOY (1946). Also look for Jack Webb in one of his earliest roles.

HOLLOW TRIUMPH is a public domain title. The DVD release from Film Chest was the source of the above screen captures.
Posted by Eric Somer at 10:58 AM