Released toward the end of the classic film noir period, the relatively obscure title BIG HOUSE, U.S.A. warrants no mention in the indispensible book FILM NOIR: AN ENCYCLOPEDIC REFERENCE TO THE AMERICAN STYLE (3rd Edition, The Overlook Press, 1992). The omission is understandable on some grounds, especially since the noir straggler does not employ quite the same visual iconography associated with the best-remembered examples of the genre. As directed by Howard W. Koch (UNTAMED YOUTH [1957], VIOLENT ROAD [1958]), the straightforward narrative plays out under primarily bright exteriors, including impressive location footage captured in Royal Gorge, Colorado, without one detour into shabby urban locales where shadowy figures so often dominate noir geography. From the very beginning, though, persistently low camera angles consistent with the noir cycle subtly hint of things to come in the screenplay written by John C. Higgins, whose writing energized some of the grittiest noir films of the prior decade, including RAILROADED! (1947), T-MEN (1947), RAW DEAL (1948), HE WALKED BY NIGHT (1948) and BORDER INCIDENT (1949), all directed by the great Anthony Mann.

After the opening credits, a gunshot signals the start of an athletic event at a children's camp. Fragile participant Danny Lambert (Peter J. Votrian) collapses from severe asthma symptoms. When camp nurse Emily Evans (Randy [Felicia] Farr) attempts to calm the boy with an injection, Danny's acute fear of needles prompts him to flee into the wilderness. A wandering fisherman named Jerry Barker (Ralph Meeker) happens on the lad, and we fear the worst since that character is portrayed by Meeker (KISS ME DEADLY [1955]). The idea that Barker could be a man of impeccable integrity seems doubtful. 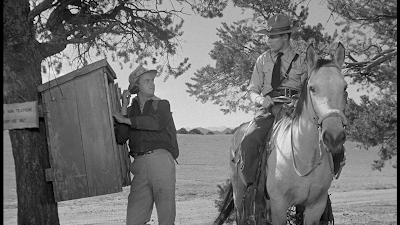 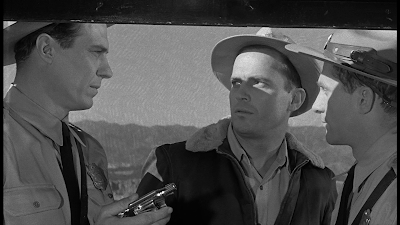 The film's second act introduces prison film conventions that nudge the film deeper into noir terrain. The focus shifts to the incarceration of Barker, deemed "The Iceman" for his ability to keep his mouth closed. He is sent to Cascabel Island Prison, where the inmates are aware he is a reputed child killer, the worst type of criminal. Barker is assigned to a "Lion's Den" packed with hardened criminals, led by infamous bank robber Rollo Lamar (Broderick Crawford), who is complemented by a convincing assembly of noir thugs:  William "Machine Gun" Mason (William Talman), "wetback smuggler" Alamo Smith (Lon Chaney Jr.) and the dangerously volatile Benny Kelly (Charles Bronson). The institution's boiler room provides a particularly appropriate noir crucible for such a salty crew; the sweat and grime of the hard labor performed within the underground mechanical facility is palpable.

Accompanied by sometimes intrusive narration, BIG HOUSE, U.S.A. is a procedural noir in the spirit of T-MEN and HE WALKED BY NIGHT. Productive cooperation is emphasized between Chief Ranger Will Erickson (Roy Roberts) and Special FBI Agent James Madden (Reed Hadley, PUBLIC DEFENDER [1954-1955]). Police procedural exercises almost always convey the identical meaning:  the law-abiding public is in good hands with the local and national law enforcement systems. No stone is left unturned in the pursuit of criminals who make the general populace feel unsafe. In the film's resolution, a big-time criminal who callously calls for the death of anyone not useful to him is shown to be a complete coward when confronted by organized authority.

Additional film noir tropes are observed by way of the narrative's criminal couple. An attractive woman with a checkered past, Nurse Evans certainly fits the bill as the resident monstrous feminine personality. Not only does she set the stage for Danny's disappearance, she presciently figures in his connection with Barker, the doomed male disliked equally by law enforcement officials and criminals. Fate brings Barker to the wounded bird Danny, each predestined to encounter the other. But the most impactful noir moments of BIG HOUSE, U.S.A. are the darkly disturbing ones:  Barker's unceremonious disposal of a small, lifeless body, a painful death within the prison's titanic boiler system, the blunt-force murder of an escaped convict and the subsequent disfigurement of his facial features. No wonder the film's theatrical poster advised, "SUITABLE ONLY FOR ADULTS." 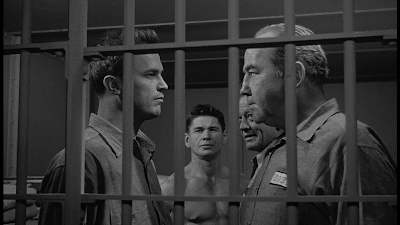 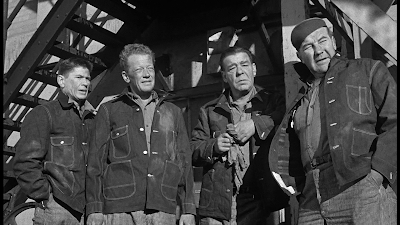 While not without its imperfections, BIG HOUSE, U.S.A. is tightly-crafted and surprisingly intense at times. I found myself thinking about it over the next few days after first watching it and that always means something. Framed at the original theatrical aspect ratio of 1.75:1, the single-layered Blu-ray version recently made available through Kino Lorber presents the film in a newly re-mastered HD transfer that does justice to the assured B&W cinematography of Gordon Avil (THE CHAMP [1931]). 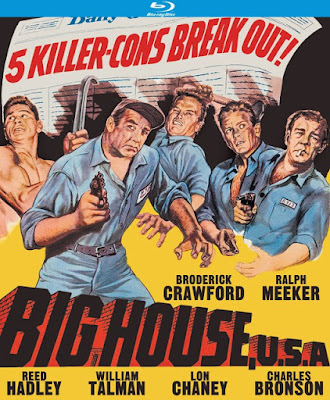