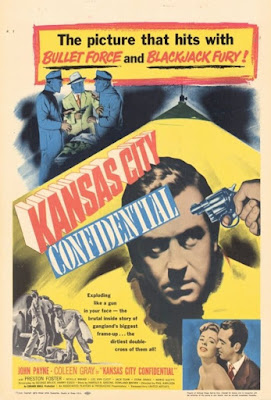 This past Saturday afternoon, NOIR CITY: CHICAGO 2017 host Eddie Muller explained this year's festival selections share a heist theme. Prior to film noir treatments, typical heist films focused on the exploits of Robin Hood-like aristocrats according to Muller. But when the Production Code began to loosen up in the 1950s, the heist storyline began to infiltrate bleak noir narratives like the durable MGM title THE ASPHALT JUNGLE (1950). The commercial success of that film set the stage for ensuing noir caper films such as KANSAS CITY CONFIDENTIAL, one of the more influential films of its kind. The memorable storyline authored by George Bruce and Harry Essex was based on a concept by Harold Greene and Rowland Brown. It was Brown who came up with the novel idea that the criminals assembled for the caper would not know each other. 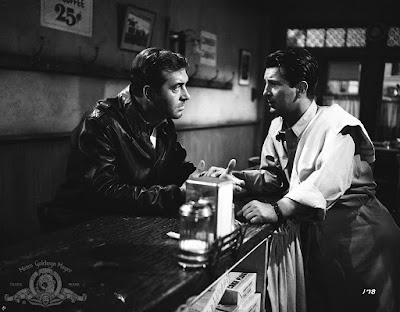 The film opens with an armored car robbery in the planning stages. To make off with $1.2 million, Tim Foster (Preston Foster) requires three accomplices whose identities are to be concealed from each other via masks. Pete Harris (Jack Elam) is a small time gambler with little choice but to join forces with Foster. The same holds true with cop killer Boyd Kane (Neville Brand) and three-time loser Tony Romano (Lee Van Cleef). The heist is executed as planned, but do not tell that to Western Florists truck driver Joe Rolfe (John Payne), who is set up by Foster to get grilled by police for the bank job. 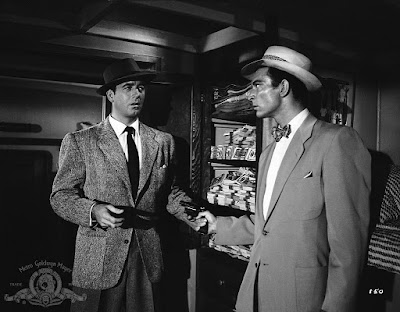 Rolfe is an ex-con, but also a veteran who was awarded the Bronze Star and Purple Heart. In a theme associated with a wide range of noir titles, Rolfe is a WWII vet faced with extreme difficulty in a civilian world. Caught in the wrong place at the worst possible time—another common problem for the noir protagonist—Rolfe even loses his job over the heist investigation. Then sensational news headlines link the innocent Rolfe with the crime. Stuck with no job prospects and no help from the police, Rolfe sets out as the rugged individualist in search of the men who trashed his life.

Though KANSAS CITY CONFIDENTIAL does not rely on darkness and shadows like many of its atmospheric noir cousins of the 1940s, when Rolfe assumes the identity of one of the bank robbers, the all around sense of paranoia and dread intensifies throughout the remainder of the film. The men recruited by Foster are invited to the (fictitious) Mexican resort town of Barados, where the robbery take allegedly will be distributed. But Foster has a complicated past of his own, and motivations unknown to the men he hired. Especially as portrayed by Preston Foster, the embittered mentor of the heist is among the more sympathetic of noir criminals, complete with a pleasant daughter (Coleen Gray) who is enrolled in law school. 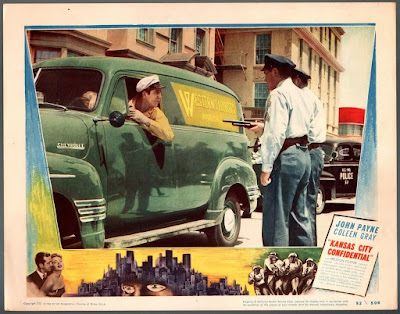 A rough and tough little film noir, KANSAS CITY CONFIDENTIAL is brimming with slapping, punching and shooting along its eventful course. Director Phil Karlson is remembered fondly for this and other hard-hitting noir exercises that would follow, two of which featured Payne:  99 RIVER STREET (1953) and HELL'S ISLAND (1955). Karlson also directed 5 AGAINST THE HOUSE (1955), THE PHENIX CITY STORY (1955) and THE BROTHERS RICO (1957), all essential viewing for the film noir enthusiast. Producer Edward Small has a similar stable of noir material to his credit, including 99 RIVER STREET. He also produced RAW DEAL (1948), WALK A CROOKED MILE (1948), DOWN THREE DARK STREETS (1954) and the outstanding NEW YORK CONFIDENTIAL (1955), one of my favorite noir films to hail from the 1950s.