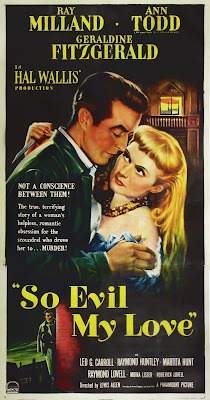 Film noir might be the most contested genre in cinema history in regard to what accounts for its composition, or what might constitute the best examples and why. Every now and then a casual movie fan asks me, "What is film noir, anyway?" I never know where to begin, and I doubt if I ever have answered the question the same way twice. Yet the hallmarks of the noir structure are easy enough to discern, as they are in SO EVIL MY LOVE, a so-called "gaslight noir" set in Victorian London. A dialectical opposition between classes contributes to a darkly ironic, fatalistic atmosphere where conditions for mutual human benefit do not seem to exist. People of virtue appear to be rare commodities, and true to form for any noir permutation, the past maintains a tight hammerlock on the present. As directed with fastidious care by Lewis Allen, perhaps the most prominent noir theme that distinguishes SO EVIL MY LOVE is the psychological anguish that comes to torture its major characters.

On a ship bound for Liverpool, a missionary's widow named Olivia Harwood (Ann Todd) fatefully encounters Mark Bellis (shifty-eyed Ray Milland), a delirious malarial patient who lives off women. Sought by police on three continents, his essence is revealed early when he learns of Olivia's inherited property, a revelation that causes him to perk up before he instinctively shields his face from area law enforcement. An eminently predatory male, Mark's behavioral mechanisms are energized by greed and self-preservation, nothing more. He becomes a lodger at Olivia's bed and breakfast in Kensington, where he relies heavily on his practiced skills as a player to develop a parasitic attachment to the vulnerable blonde widow. Olivia soon finds herself trapped in a situation in which Mark constantly asks more of her, despite the fact she is not a wealthy woman. She is betrayed by her own persistent feelings for the despicable trickster. 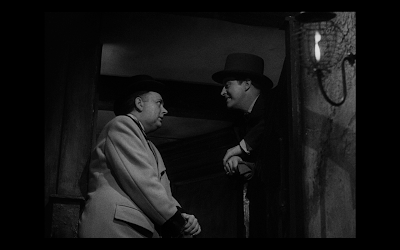 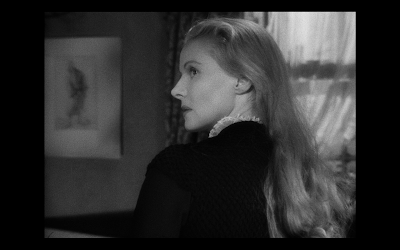 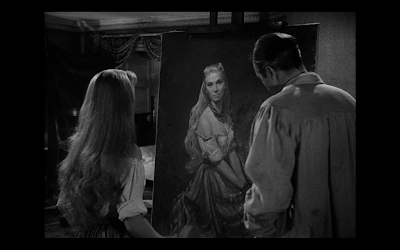 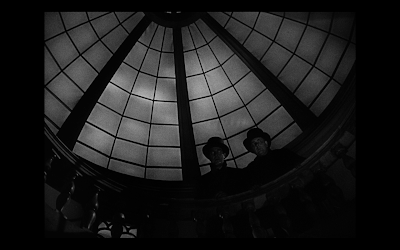 In an inversion of the idealized likeness theme so common in film noir that followed LAURA (1944), Mark's painting of Olivia works to awaken her missed opportunities. She looks at her portrait and sees only unrealized potential. That nagging feeling of disappointment works in favor of Mark's agenda as he reminds her a lifetime of giving to others has done nothing to enrich her own life. He skillfully inculcates her with a sense of entitlement. That coupled with Mark's immutable appetite for money consistently coerces Olivia into making bad decisions, even though she only desired togetherness. The piano instructor Miss Shoebridge (Muriel Aked), a troglodyte tenant who leaves the Harwood house in a huff, suspects Olivia is possessed by the devil. Could be—Mark's acts of deception know no boundaries. After Olivia steals financial assets due to intense encouragement from Mark, he boldly hides 40% of the income realized from the sale!

A man of multiple identities (Mark, Robert, Gilbert, Kenneth), always the badge of the noir cad, the homme fatale Mark recalls similarly odious film noir schemers such as Charlie Oakley (Joseph Cotten) in SHADOW OF A DOUBT (1943) and Ronnie Mason (Zachary Scott) in DANGER SIGNAL (1945). Though a painter of some talent, Mark has no qualms about stealing paintings and eventually overcomes his reluctance to sell imitations of famous artists. In a speech that lays the groundwork for art forgery, Mark expresses concern that appreciation for art is locked in achievements of long ago. He thinks it highly unlikely a new artist could be discussed alongside the accepted greats, and even if it happened, the best one could hope for is posthumous acclaim. That accounts for his somewhat uneasy criminal allegiance with Edgar Bellamy (Raymond Lovell). It is never revealed exactly what past events bind Mark with Edgar, though it is inferred if one goes to the gallows, so does the other.

Much of film noir is grounded in a cynical assumption about human nature:  people like Mark derive a satisfying sense of superiority through manipulation and control of others. Henry Courtney, Esq. (Raymond Huntley), a tyrannical purveyor of entrenched patriarchal values, is another such individual, especially with the added presence of his icy mother (Martita Hunt). An annoyingly condescending and chauvinistic husband, he threatens to commit his troubled wife Susan Courtney (Geraldine Fitzgerald) to a sanatorium. Susan is a jittery neurotic in desperate need of a helpful support network, but probably not the sort her husband has in mind. She shows her humanity when she scrapes up twenty pounds for Olivia, but of course the funding is turned over to Mark in short order. Unable to provide her husband an heir (probably through no biological fault of her own, though Henry's potency is called into question), Susan progresses from a fragile psychological state to borderline madness, thanks mostly to the combined efforts of a domineering husband and a false friend. Everyone who should care for her turns on her. The indifferent noir universe really has it in for Susan, shown to be on unsteady ground when we first meet her, and unable to stand by the film's final act. She even comes to believe those who see guilt in her must be correct. 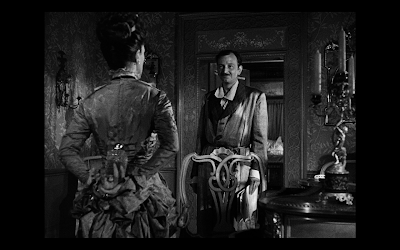 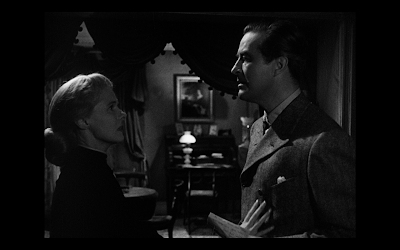 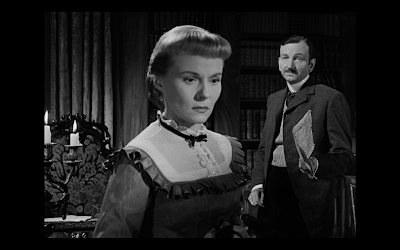 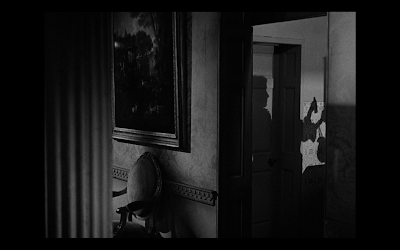 SO EVIL MY LOVE is steeped in moral ambiguity, with no character dramatically better than another. The dynamic between Henry and Olivia illustrates that notion perfectly. Henry hires Olivia to keep a watchful eye on the dipsomaniacal Susan, but ironically his incessant cruelty intensifies Olivia's allegiance with Mark as she removes valuables from the Courtney estate. When she seemingly seizes the upper hand against Henry, Olivia relates her unprecedented feeling of empowerment to Mark:  "It was a wonderful sensation. I've never had it before." Such are the words of a woman long accustomed to patriarchy as society's dominant ideology. Interestingly, Henry expresses only mild annoyance when confronted with her £5000 blackmail attempt. In the film noir, to exert or absorb such pressures is to be expected of everyone concerned.

The concluding sequence implies female sacrifice is necessary to topple entrenched patriarchal power, even in a house of worsening male health. That takes "a brave woman" according to the private investigator Jarvis (Leo G. Carroll), who serves as the morality mouthpiece ("...the things you'd find in the most respectable neighborhood you'd be surprised..."). The impotent barrister Henry embodies aristocratic decay, the mean man with (naturally) a weak heart, chronic sickness clinging to power. It is worth noting Henry actually outwits Olivia's blackmail maneuver; it is her physical vitality that leads to his defeat, not her prep work. As for Mark, his shallow woman on the side Kitty Feathers (Moira Lister) unknowingly activates his comeuppance. Through the return of an item originally owned by Susan, Olivia learns the hard truth:  the widow has been both victim and victimizer. The narrative's power struggle triggers mental trauma episodes that recall the type of psychological hell promised for wrongdoers in the nightmarish conclusion of Fritz Lang's SCARLET STREET (1945). Mark questions everything about himself and Olivia is plagued by deeds that cannot be undone. Far worse off is Susan, left in the wreckage of one of film noir's many fruitless marriages. Though the most reprehensible men of the film are unable to avoid the sting of retribution, the all-male jury that judges Susan reflects an aging last bastion of male privilege unlikely to go quietly. 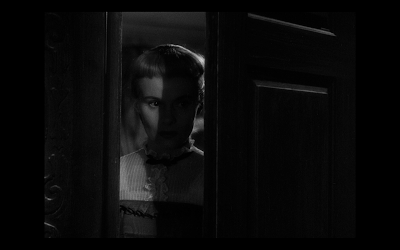 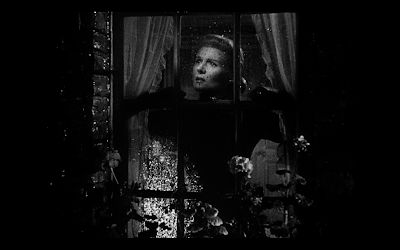 An Anglo-American co-production between Paramount's Hal Wallis Productions and Denham Studios in England, SO EVIL MY LOVE is an adaptation of the 1947 novel FOR HER TO SEE by Gabrielle Margaret Vere Campbell Long (published under the pseudonym Joseph Shearing). Certain plot elements may have been derived from the unsolved death of barrister Charles Bravo in 1876, as well as the death of Cesar Young in 1905. The pleasingly literate screenplay was written by Ronald Millar and Leonard Spigelgass. Cinematographer Mutz Greenbaum's virtuosity with camera placement is apparent at all times; there is a logical elegance to the simplicity of coverage that breezes effortlessly through a world of endless deceit.

The Kino Lorber dual-layered Blu-ray edition released recently serves up a new 2K master and looks very good in motion, various scratches be damned. Framing is approximately 1.38:1. The disc includes a new audio commentary track from incisive film historian Imogen Sara Smith, who appraises classic film as well as anyone. For an old-school film fan like me, one must come prepared with a quality pen and a lot of paper when Smith is talking; there is much to note. One of her best findings is that none of the many transgressions seem justified or are likely to evoke a sympathetic response from the viewer, yet somehow one is able to empathize with the principal characters, however unappealing they may be. Indeed the film noir specializes in the presentation of such patterns of criminal behavior. Part of the package is a level playing field; the lower class is depicted no better than the upper class in terms of a moral compass. Also according to Smith, the film noir under review provides a rare glimpse into a relationship between women with its "...believable if ugly portrait of female friendship..."

A trailer gallery includes the featured film and several other related titles available from the ever-reliable Kino Lorber. 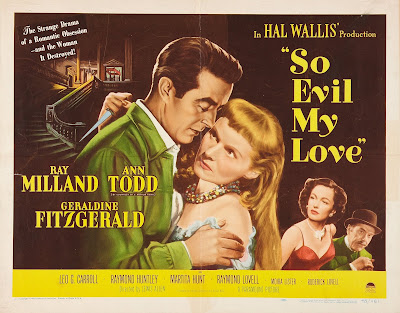 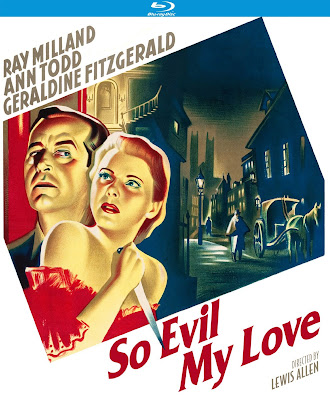 Email ThisBlogThis!Share to TwitterShare to FacebookShare to Pinterest
Labels: SO EVIL MY LOVE (1948)