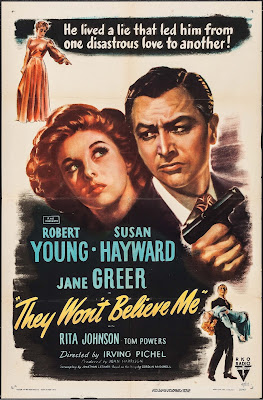 Marital dissatisfaction and infidelity inform a vast array of film noirs, but that is not to imply all cases are stamped from the identical template. The major protagonists who stray from their partners in DOUBLE INDEMNITY (1944), THE SUSPECT (1944), SCARLET STREET (1945), MILDRED PIERCE (1945) and NOTORIOUS (1946) may not always be entirely sympathetic, but their respective spouses are depicted in a far more negative light. Such a dynamic allows the viewer to support or at the very least understand the motivations of the character defaulting on his or her wedding vows. It is less easy to back Larry Ballentine (Robert Young), the inveterate philanderer of THEY WON'T BELIEVE ME, directed by Irving Pichel. For all the healthy benefits married life provides Larry, his preferred regimen demands women on the side.

As the narrative commences, the 34-year-old stockbroker Larry is on trial for murder. His rustic attorney Cahill (Frank Ferguson) suggests Larry was led astray by a woman, but of course there is much more to it than that. As Larry takes the stand, the film assumes customary noir flashback form. We land in a New York restaurant, where Larry awaits the arrival of his mistress Janice Bell (Jane Greer), a journalist. Her damaged cigarette case prompts his purchase of a gold replacement case, but the gesture is not meant to be. When Larry arrives home, he learns he has forgotten his five-year anniversary with his wife Greta (Rita Johnson). Trapped with no better alternative, he gives the recently-purchased gold cigarette case to Greta, thus confirming his heel personality. Tired of her role as the other woman, Janice announces her transfer to Montreal, but Larry hopes to hang on to her. His plans are thwarted when Greta reveals she has discovered his affair. Despite proof positive her husband is a no-good cheat, Greta is a woman of almost limitless tolerance. Rather than lose her mate to the charms of Janice, Greta arranges to move her marriage to Los Angeles, where she has secured new employment for her husband in a minority partnership in a brokerage business headed by Trenton (Tom Powers). A new home in Beverly Hills is part of the sweet package. 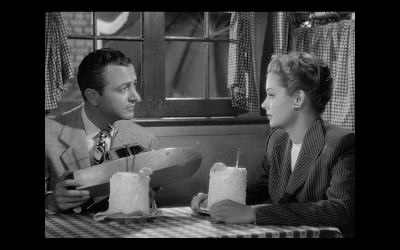 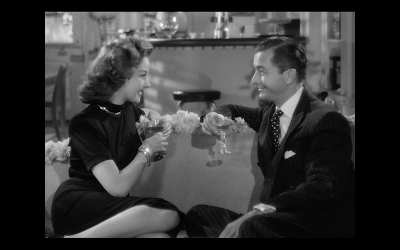 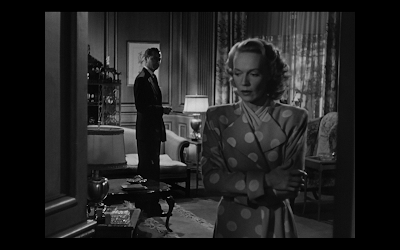 In spite of Greta's many virtues, for whatever reason Larry finds his wife dull as cereal for breakfast. Most any man would find much to admire about her:  she is rich, nice looking, smart, articulate, attentive, cultured, classy. Larry values her financial resources for certain, but those other attributes do not seem to hold much ground with him. Her only apparent deficiency cannot be helped:  she only can be the woman she is, and her competition in the form of Janice is sleek, elegant and some 10 years younger. After about six months in LA, Larry's base compulsions continue when he meets the flirtatious Verna Carlson (Susan Hayward), an attractive employee at his new workplace (an environment meant to cure him of such urges—ironically, she comes on to him). Verna is a self-described gold digger but oozes too much sex appeal for Larry to deflect. The two begin a relationship, despite Larry's marital status and Verna's romantic connection with 75% majority owner Trenton. Marital discord between the Ballentines returns when Greta finds out about the "tramp" Verna. Greta's plaintive struggle to keep her husband out of the arms of younger brunettes resumes when she again relocates her shaky alliance, this time to an isolated Mexican ranch house in a mountainous area far from the many temptations the big city provides, the sort of place where horseback rides replace taxis. Greta even goes so far as to have the house's telephone connection removed in the interest of preventing further indignities. 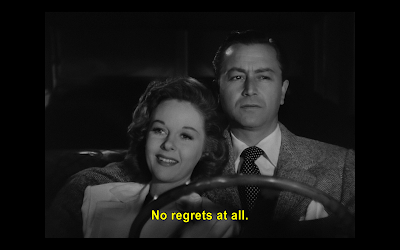 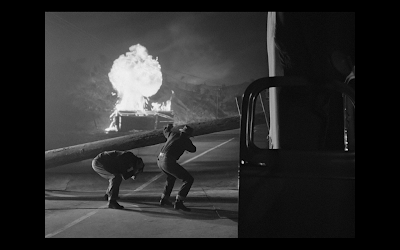 THEY WON'T BELIEVE ME anticipates film noirs such as ROAD HOUSE (1948), THE ASPHALT JUNGLE (1950), CRY VENGEANCE (1954) and NIGHTFALL (1957) that illustrate film noir concerns are not exclusively urban. Noir stories of the 1940s often culminate in a harsh urban landscape, but THEY WON'T BELIEVE ME forges a path beyond the city, where the spreading specter of noir forces collides with Larry, Verna and Greta. Larry gets tangled up in the same web of deceit regardless of his home's location. The non-monogamous choices he makes may be his own, but his fate is determined by that familiar existential noir force, one that has followed him from one place to another. Interestingly, the story's calamitous turning point occurs after Larry and Verna mutually reject a plan they had developed to siphon money out of a joint checking account. Regardless of more honorable plans for the future, past decisions made by Larry, Verna and Greta have piled up beyond redemption. Especially for those with a long history of questionable moves, to hit the reset button does not necessarily grant the desired result in the unforgiving land of noir.

In terms of other genre themes and motifs, identity swaps of any kind seldom work out well in the context of the film noir narrative. See DETOUR (1945), NORA PRENTISS (1947) and THE NAKED CITY (1948) for convincing evidence. Larry makes that unadvised error when he flips Verna's identity with Greta's, which hastens his downward spiral. The random indifference of the noir atmosphere sometimes puts the finger on the basically good, but Larry does not meet that standard. He is an unworthy kept man who attempts too late to extricate himself from the woman he married only for her considerable wealth. The film's stunner of a conclusion is steeped in irony while wholly appropriate. Larry judges himself correctly, whether the jury did or not is largely irrelevant. 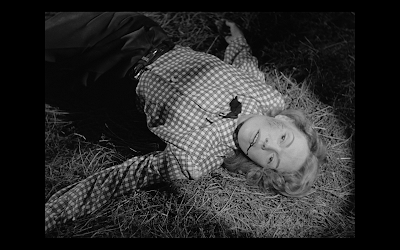 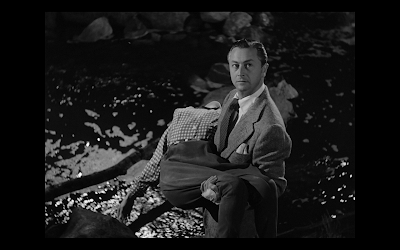 Director Irving Pichel scored a notable debut feature with THE MOST DANGEROUS GAME (1932), the first and arguably best of the many adaptations that would follow of Richard Connell's original story, first published in 1925. Pichel also has another noir movie to his credit, the entertaining QUICKSAND (1950). Producer Joan Harrison built her reputation on screenwriting contributions for Alfred Hitchcock:  JAMAICA INN (1939), REBECCA (1940), FOREIGN CORRESPONDENT (1940), SUSPICION (1941) and SABOTEUR (1942). As a producer she left an impression with some of the finest of film noirs, such as PHANTOM LADY (1944), THE STRANGE AFFAIR OF UNCLE HARRY (1945), NOCTURNE (1946) and RIDE THE PINK HORSE (1947). THEY WON'T BELIEVE ME might be the most hard-hitting of that distinguished group, though PHANTOM LADY packs quite a punch as well. Eminent director of photography Harry J. Wild certainly knew how to handle the noir production, with an ample amount of genre entries to his credit. Just some of the film noirs he worked on include MURDER, MY SWEET (1944), JOHNNY ANGEL (1945), CORNERED (1945) PITFALL (1948), THE THREAT (1949) and WALK SOFTLY, STRANGER (1950), an unfairly underrated noir. Screenwriter Jonathan Latimer made a similar mark on the genre with his contributions to THE GLASS KEY (1942), NOCTURNE, THE BIG CLOCK (1948), NIGHT HAS A THOUSAND EYES (1948) and the sublime noir fantasy film ALIAS NICK BEAL (1949). 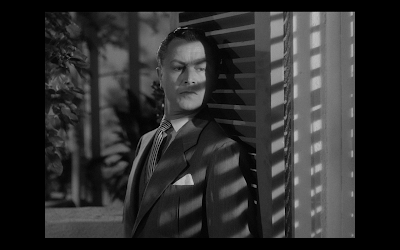 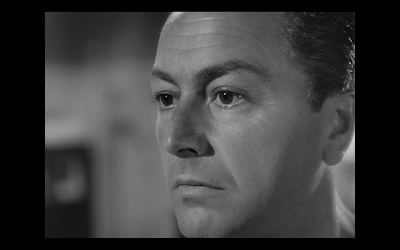 Sourced from a 4K scan of nitrate preservation elements, the dual-layered Blu-ray edition of THEY WON'T BELIEVE ME recently made available by Warner Archive is framed at 1.38:1 and looks outstanding. Though the disc is void of supplemental material, this new HD transfer reinstates the film's original theatrical length, as Eddie Muller alerted noir fans via Facebook on 4/6/2021. According to Muller, "It has been decades since the original 1947 cut of this film has been seen. The film was cut in the 1950s for reissue on double bills and that's the only version that has circulated in recent years. I only saw it complete years ago in Zagreb, a print loaned by the Belgrade Film Archive. Almost 15 minutes has been restored."

Destined to be one of the year's most important Blu-ray restorations, this disc should be an automatic add for film noir collectors. 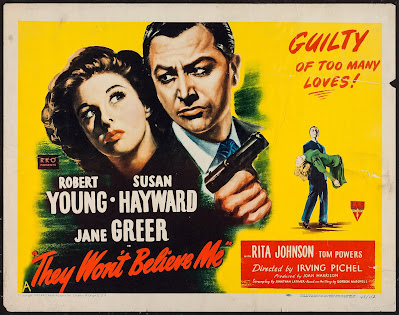 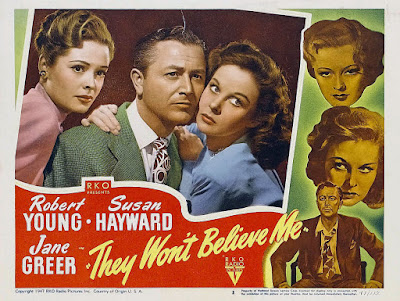 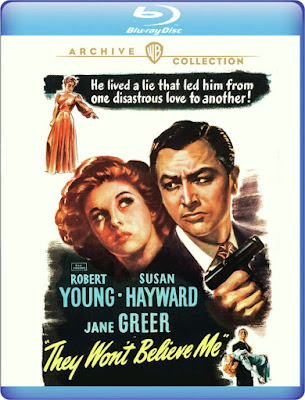 Email ThisBlogThis!Share to TwitterShare to FacebookShare to Pinterest
Labels: THEY WON'T BELIEVE ME (1947)