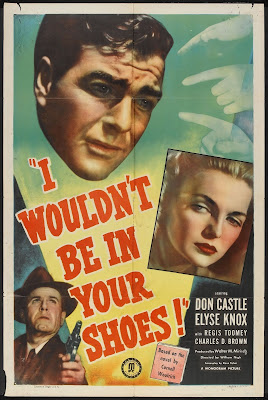 Film noir builds many rooms atop consistent pillars, its support structure provided by post-WWII malaise, fatalistic themes, atmospheric cinematography and, perhaps most important, attention devoted to ordinary people (this could happen to you!). That last pillar is tested in I WOULDN'T BE IN YOUR SHOES, a serviceable noir programmer from Monogram Pictures.

After an introductory segment that emphasizes the time-sensitive nature of what we are about to witness, the story gets underway in New York City within a tiny studio apartment where the beds are one step from the entrance. It is a hot July night, and Tom Quinn (Don Castle) is upset his wife Ann (Elyse Knox) has yet to return home from work. He imagines she is being pursued by any number of men who have taken notice of the attractive instructor at Ortiz Dancing Academy. When Ann arrives home safe and sound, the two discuss their stagnant act as a tap dance team. Ann believes if they could get established in California there is still time for them to make it, though Tom feels they would spend more time working in the food service sector than dancing.

The narrative drifts deeper into its noir orbit when Tom tires of nocturnal alley cat noise. He hurls both of his shoes at the screeching felines, but is unable to retrieve his footwear in the darkness. Weirdly, his shoes materialize the next morning. Stranger still, sufficient funds for the husband-wife dance act to relocate in California wind up in Tom's hands, but he recognizes the lost $2000 must be missed by someone. After Ann adopts a "finders keepers" mentality, the couple compromises by watching the lost and found section of local newspapers for a week. They agree to keep the cash in the event no one places an ad in search of it. Nobody raises a flag in search of missing money, but before there is much opportunity for celebration two cops arrest Tom on a murder charge! Circumstantial evidence is sufficient to produce a guilty verdict. 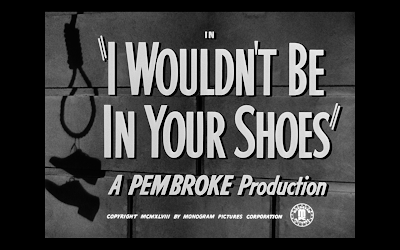 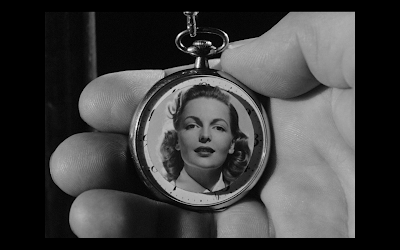 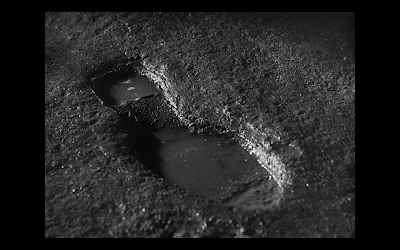 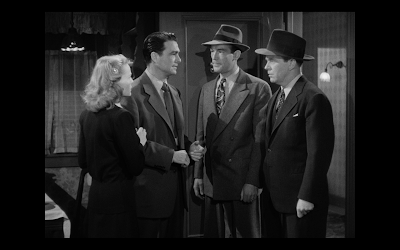 Despite its brief runtime, I WOULDN'T BE IN YOUR SHOES is hardly deficient in necessary noir ingredients. It begins at the end, with a doomed man's narration guiding the viewer through his flashback. A crucial segment of the film underscores Tom's complicity in his dire situation; though his instincts instruct him to turn in the found money, he allows his wife's persuasive influence to prevent that action. As Tom makes his case for doing the right thing, Ann pressures him to keep the money, as if it fell from heaven specifically for their wants and needs (in fact the money is planted to destroy their marriage). Indeed the narrative blames Ann for her husband's death sentence. She even offers herself to the man smitten with her, Police Inspector Clint Judd (Regis Toomey), should he be able to prove Tom's innocence. Interestingly, the sexual control wielded by Ann is both the cause of and solution to Tom's fast-approaching date with the electric chair.

The element of psychological torture that so frequently attaches itself to the noir protagonist erupts at the trial, where Tom cannot hide ("Shoes!" "Shoes!" "Shoes!"). The mental torment continues when the judge sentences Tom to die just after Christmas! Now that is a noir execution. The indifference of the noir universe seems particularly cruel when one considers all the events that stack up against Tom. As always, the many unlikely plot details are best thought of not as coincidence, but fate (not to suggest the story is all that plausible). Another theme consistent with film noir concerns involves the incredible lengths men will go to for the sake of securing a hot-looking woman in the bedroom. Tom's suspicions in the early going prove completely accurate; the "creeps" who gravitate to his wife for dance lessons envision closeness to her beyond the dance floor. On an even more pessimistic note is the film's distrust of law enforcement officials. The system is driven by convictions, not justice. Either downright dirty or disappointingly indifferent, the most disconcerting example of lawman is more interested in economic prosperity with the woman of his dreams than public duty. In marked contrast is the connection the viewer is encouraged to feel for Tom and the other death row inmates. That opening pan from right to left lets us know in no uncertain terms how the filmmakers feel about the death penalty. I WOULDN'T BE IN YOUR SHOES supports the human rights of these condemned men, though animal lovers are sure to note that Tom's spoken wish to kill feral cats coincides with his downward spiral. 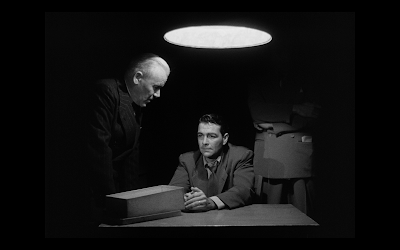 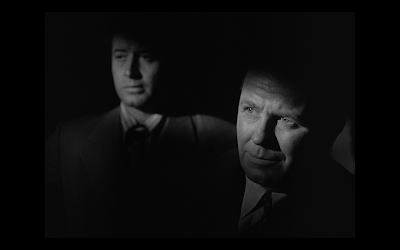 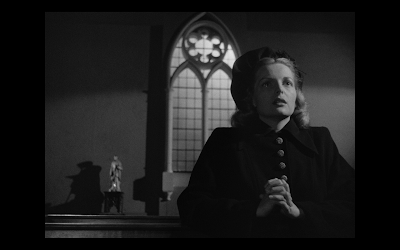 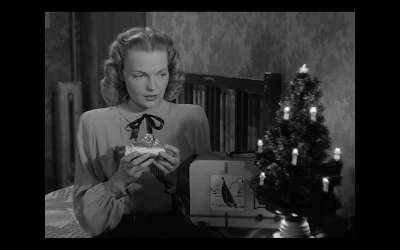 Director William Nigh began his career as an actor in 1911 before turning to directing. Like so many others of his time, his career did not benefit from the industry's transition to sound. He would spend his last twenty years in the industry churning out B product for Poverty Row studios like PRC and Monogram. Screenwriter Steve Fisher's vast film noir credits include JOHNNY ANGEL (1945), LADY IN THE LAKE (1946), DEAD RECKONING (1947), ROADBLOCK (1951), CITY THAT NEVER SLEEPS (1953) and HELL'S HALF ACRE (1954). For I WOULDN'T BE IN YOUR SHOES, Fisher adapted the work of noted crime writer Cornell Woolrich (published under the pseudonym "William Irish" in 1943). Fiction authored by Woolrich anchored noir heavyweights such as THE LEOPARD MAN (1943), PHANTOM LADY (1944), THE CHASE (1946) and THE WINDOW (1949). Cinematographer Mack Stengler also worked on FALL GUY (1947), another Woolrich adaptation released the prior year, produced by I WOULDN'T BE IN YOUR SHOES producer Walter Mirisch, who will turn 100 on November 8th, 2021. Don Castle also starred in HIGH TIDE (1947) and THE GUILTY (1947), quality B noirs distributed by Monogram Pictures. 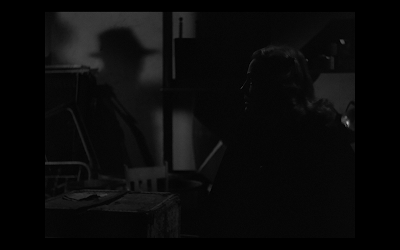 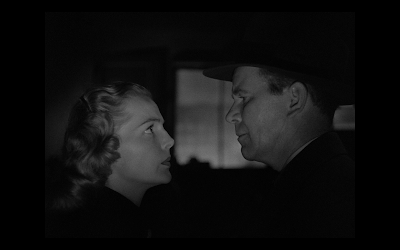 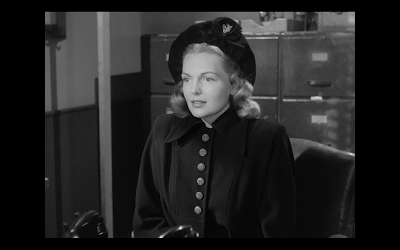 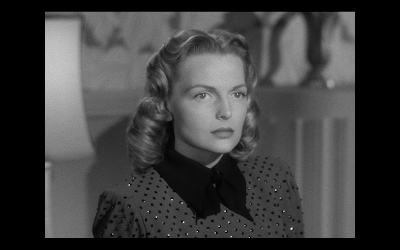 The single-layered Blu-ray recently made available from Warner Archive was derived from excellent source material, especially considering the obscurity of this title. Framing looks appropriate at 1.37:1. Bonus material includes the modestly entertaining short film THE SYMPHONY MURDER MYSTERY (21m 27s, 1932) along with the clever Merrie Melodies cartoon HOLIDAY FOR SHOESTRINGS (7m 22s, 1946). Like I WOULDN'T BE IN YOUR SHOES, the animated feature samples Frederic Chopin. 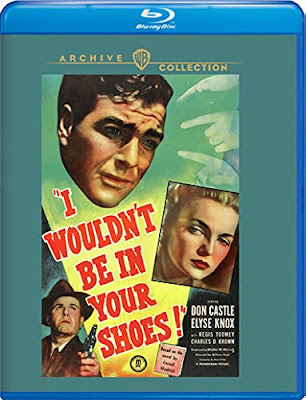 Email ThisBlogThis!Share to TwitterShare to FacebookShare to Pinterest
Labels: I WOULDN'T BE IN YOUR SHOES (1948)