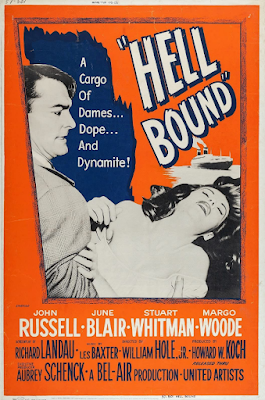 The noir heist film of the 1950s has its origins in THE ASPHALT JUNGLE (1950), a superb effort from director John Huston. Though not a huge commercial success at the time of its release, the Huston film was followed by a number of quality noir heist pics including ARMORED CAR ROBBERY (1950), ROADBLOCK (1951), KANSAS CITY CONFIDENTIAL (1952), 5 AGAINST THE HOUSE (1955), I DIED A THOUSAND TIMES (1955), THE KILLING (1956) and ODDS AGAINST TOMORROW (1959), one of my personal favorites. HELL BOUND may owe a spiritual debt to all of the great heist films that came before it, but director William J. Hole Jr. ensures his contribution to the durable noir subgenre has more than enough grit to stand apart. A potent distillation of the heist film, this turbulent thriller from Bel-Air Productions anticipates the unfiltered violence of the American crime film that would crest in the 1970s, with muscular neo-noirs directed by the likes of Robert Altman, William Friedkin, Arthur Penn, Roman Polanski, Martin Scorsese and Don Siegel.

Confidently armed with a well-researched international drug smuggling scheme, Jordan (the familiar face of John Russell) stands before businessman Harry Quantro (Frank Fenton) with vigor. The operation involves infiltrating a freighter from the Far East bound for the Port of Los Angeles. The plan is green-lighted with one addition in the tantalizing form of Paula (June Blair), a woman who instantly spells trouble. Jordan agrees to inject Paula into the cast of characters necessary to perform the heist. But as the trained noir eye should suspect, the plan of military precision does not translate to perfect execution, thanks mostly to a destabilizing noir atmosphere rich with ironies and irresolvable problems. As the curtain falls on the major protagonist Jordan, prevailing noir forces allow no time for reckoning over what went wrong. 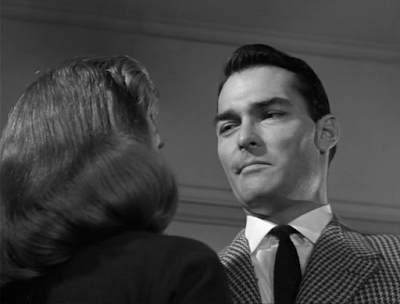 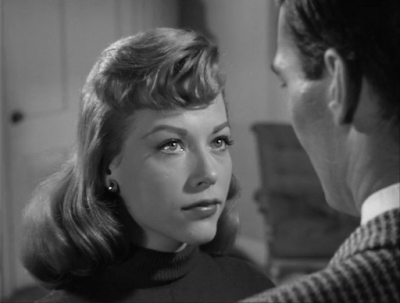 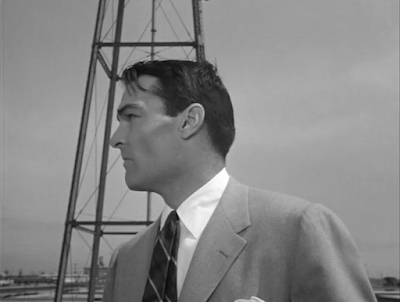 Characters of the heist film tend to be assembled based upon the unique skill set each individual brings to the table. In HELL BOUND, Jordan deliberately brings together people who are flawed, and that speaks to his own flaw as a planner. Herbert Fay Jr. (Stanley Adams) is a health officer who is a diabetic, and that irony is not lost on Herbie. His physician happily informs him he no longer requires insulin shots, that to take one could cause catastrophic heart failure, but Herbert's agreement with Jordan calls for a potentially fatal injection. In the film noir, sometimes what should be good news is really bad news. The viewer is granted a subjective shot from Herbert's disoriented view before he gets a patented noir send off (carted out feet-first). Another flawed recruit is Stanley Thomas (George E. Mather), the "butcher boy" who killed his significant other on the operating table. After he takes a vicious beating from Jordan, Stanley is on board. The unwanted assignment leads Stanley to a strip club to visit the blind dope dealer "Daddy" (Dehl Berti), a memorable noir peripheral character to say the least. Why would a blind man be so excited to be in the presence of a topless dancer? Since "Daddy" cannot see the leggy burlesque performer in front of him, the viewer might assume there will be some touching going on off camera.

The accomplice Jordan didn't ask for is the first to default on her commitment to the heist. Early in the film, it is said Paula has "two heads on her shoulders." One is the beauty, one is the pragmatic thinker. This observation, though not 100% accurate, nicely anticipates her conversion from femme fatale into conscientious maternal figure. Paula undergoes this metamorphosis suddenly, when she witnesses a young boy's death en route to the hospital (a truly chilling moment). It is made clear that under her carapace of sexual confidence is a sensitive, unselfish creature. The duality of woman is referenced again when Paula feels compelled to remind Eddie Mason (Stuart Whitman) she is both a nurse and a woman. In a genre that tends to emphasize woman as strictly one thing or the other, HELL BOUND suggests such categorization is troublesome. 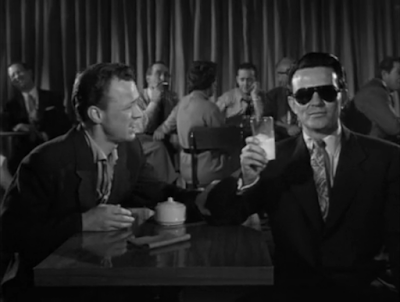 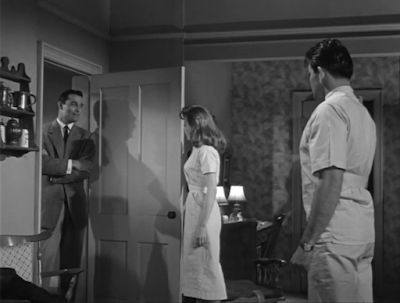 Jordan is a man with an existential belief system, though in fact he does not see himself as a man, at least not in the same sense most of us probably do. "I've got no blood," he tells Paula as he rebuffs her considerable sex appeal. The narcotics acquisition plan comes first; not even a looker like Paula can distract him. The accuracy of his odd self-description is confirmed when he callously runs down an international connection who no longer is of any use to him. Later Jordan victimizes Paula with a vicious knife attack. Jan (Margo Woode), Jordan's original choice for Paula's role in the heist, recognizes that something is amiss when she tells Jordan, "suddenly your whistle is off-key." Though at the time of that quote Jan is not quite in the know about what exactly happened with Paula, her comment tellingly reflects the huge difference between Jordan's planned version of the heist and the actual event. HELL BOUND's concluding sequence is simultaneously predictable and fascinating as criminal activity leads to logical consequences (though the manner in which that certainty reaches its apex scores mega originality points!).

Executive producer Aubrey Schenck, producer Howard W. Koch and Edwin F. Zabel founded Bel-Air Productions, a film factory for low budget fare during the mid-1950s. Koch's meritorious career includes executive producer credit on THE MANCHURIAN CANDIDATE (1962) and producer credit on THE ODD COUPLE (1968). His first films as director both happened to be noirs:  SHIELD FOR MURDER (1954) and BIG HOUSE, U.S.A. (1955). Schenck's debut as producer was the film noir SHOCK (1946). Schenck and Koch also combined talents for T-MEN (1947), an incontestable noir must-see, with Schenck as producer and Koch as assistant director. Cinematographer Carl E. Guthrie had extensive experience capturing noir productions, including his work on BACKFIRE (1950), CAGED (1950), HIGHWAY 301 (1950) and HOLLYWOOD STORY (1951). Location footage is crucial to HELL BOUND's tone, particularly the industrial landscapes that compose the waterfront of Terminal Island between the ports of Los Angeles and Long Beach, where overhead shots minimize a man in relation to his surroundings. The byzantine complexity of a cargo ship gives shape to the film's final act, even more impactful is the footage of Jordan on the run within the streetcar cemetery near Southern Pacific Railyard, an inspired choice of scenery for this film noir's resolution. A familiar face to fans of the Western, John Russell appeared in a number of film noirs of interest, such as SOMEWHERE IN THE NIGHT (1946), UNDERTOW (1949) and HOODLUM EMPIRE (1952). June Blair was PLAYBOY magazine's Playmate of the Month within the January 1957 issue. 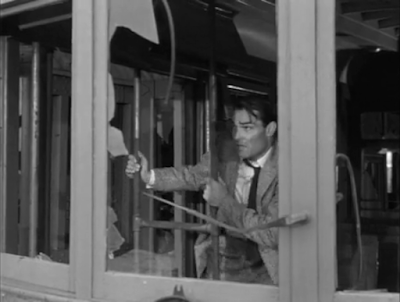 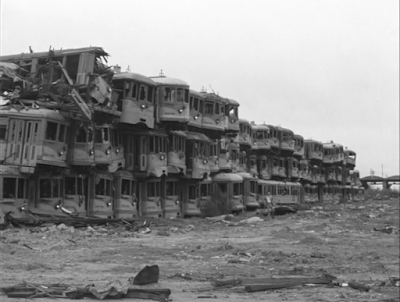 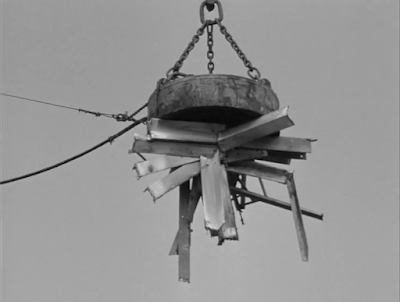 Like the best examples of the genre always seem to offer, HELL BOUND has its share of moments that are sure to stick with you, and it withstands repeat viewings without issue. Hopefully a Blu-ray release of this top-shelf B noir will become available at some point in the future. The print shown on TCM is less than ideal but perhaps the best available source material out there. The option available via Amazon Prime appears to be derived from the same print. 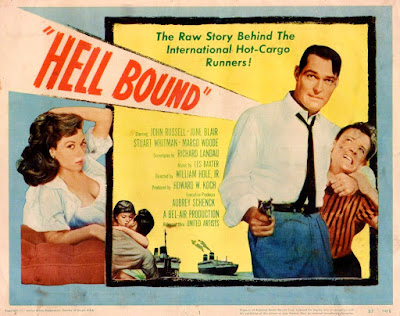 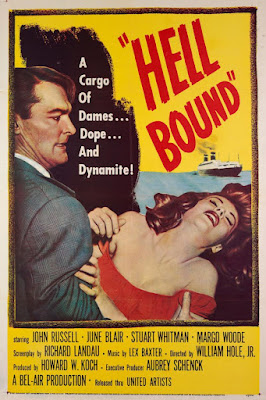