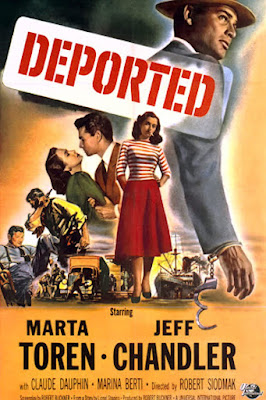 Another of film noir's evocative one-word title treatments, DEPORTED unveils the inverse of the American dream, one immigrant's remarkable full-circle journey. The standard narrative that features the determined immigrant is given a noir flash forward in this international production with distinctly American concerns. Though many of its implications are cynical, DEPORTED is not without a glimmer of hope.

The material was inspired by the deportation of real-life crime boss Charles "Lucky" Luciano (born Salvatore Lucania). Our story opens in Naples, Italy where Vic Smith (Jeff Chandler) is being returned from American soil after an extended stay in New York City. Vic first immigrated to the US in the early 1920s but has been booted from the country after serving a five-year stretch in Sing Sing for racketeering. At the pier to welcome Vic is Vito Bucelli (Claude Dauphin) of the Italian Ministry of the Interior, who strongly believes Vic will be intent on recovering the $100K in ill-gotten gains he has hidden somewhere. Bucelli is an intuitive man (think Barton Keyes [Edward G. Robinson] from DOUBLE INDEMNITY [1944]). Determined to catch a criminal before he commits a crime, Bucelli has a nose for such matters, a nose that has been reliable for many, many years. Per a mandate from Bucelli, Vic must stay with his remaining family for 30 days minimum in Marbella. 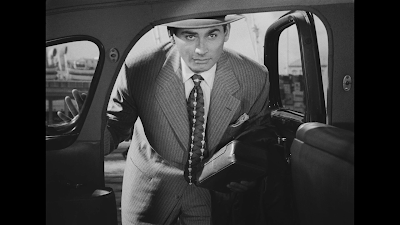 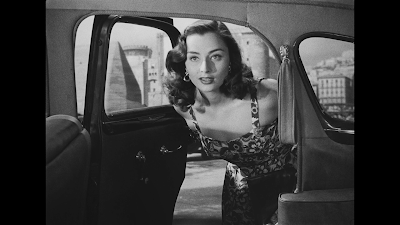 A self-assertive, confident man, Vic shows how quickly he can get the upper hand in a tough situation during an unexpected meeting with his former partner in crime Bernardo "Bernie" Gervaso (Richard Rober, burdened with some of the film's exposition dialog). Bernie has followed Vic to Italy in the hope of getting his share of the money Vic has stashed, though Vic feels entitled to the entire $100K since he did five years and kept his mouth shut about their partnership. Prepared for a requisite low-key existence in Marbella, Vic's outlook improves when he eyes Countess Christine di Lorenzi (Märta Torén), an elegant, philanthropic brunette and widow of five years (interestingly, the same amount of time Vic spent in a correctional facility). During that time frame Christine has lived in sexual retirement, perhaps another parallel to Vic. It is not difficult to understand why Vic falls for Christine; that a woman of her social experience would desire him tends to strain credulity.

DEPORTED is set in a post-WWII land of food shortages, with bread lines a frustrating part of daily life. That circumstance underscores a major difference in character types when Christine is upset to notice Vic encourage children to fight over an item of value (an old habit of his introduced in the film's early moments). Here we have "roughneck" American capitalist notions defiantly at odds with the European socialist, along with the existing contrast between the uneducated, boorish male criminal and the sensitive, cultured woman with a charitable heart. Christine, who would like nothing more than to know everyone has enough to eat, wrongly equates Vic with selfless American goodness and generosity when in truth he embodies corrosive American greed. 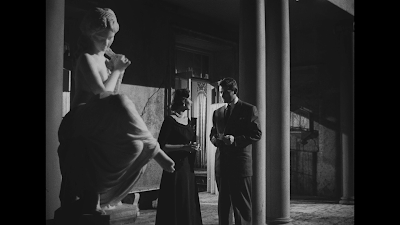 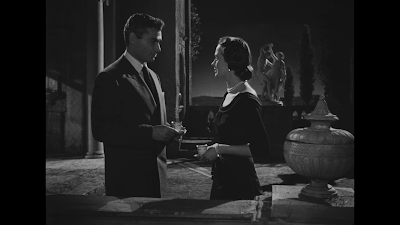 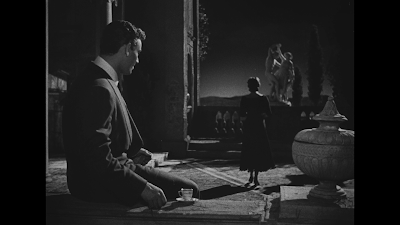 Gina Carapia (Marina Berti) serves as femme fatale and counterpoint to Christine. Though Gina leads Vic into a tough setting when they first meet, when he later encounters her, he cannot resist following her again. That is the dangerous film noir woman for certain; even when a man knows of her essence, he cannot deny his attraction to her. In her own way Gina is more worldly than the aristocrat Christine. From the very beginning Gina understands Vic far better than her polar opposite does. "Oh, I could fool you a hundred times," Gina assures Vic. In fact, it is only due to Gina's command of her magnetic sexuality that Bernie is able to link Vic to Guido Caruso (Carlo Rizzo), a local small-timer noted for moving food for badly inflated prices through the black market.

Probably the most noir element of DEPORTED is the association it draws between Vic's dark past and America's relationship with other countries. The US likes to think of itself as the world hero who props up other countries unable to do as much on their own. Perhaps the truth is there is no such thing as a completely benevolent benefactor, that behind every ostensibly humane act is a person like Vic, driven primarily by his own interests. "Mr. America" he derisively calls himself at one point. Vic's antithesis is his salt-of-the-earth uncle Armando Sparducci (Silvio Minciotti), an altruistic bread baker content to live a simple life devoid of material possessions. Uncle Armando mistakenly believes his nephew worked for the US government based upon a federal notice he received! It is inferred large amounts of such gullibility is necessary for deception to function on a grand scale. 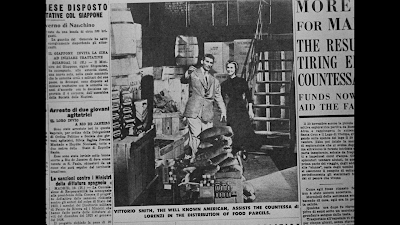 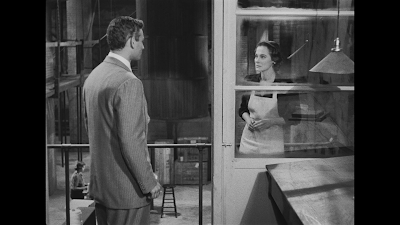 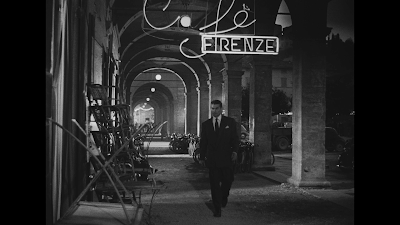 To connect additional noir themes and motifs with Vic is simple, such as the familiar noir trope of multiple identities within one body (Vic Smith / Vittorio Mario Sparducci), a pattern set in place to convey complexity of personality. Then there is the unmistakable noir theme of alienation experienced by the lead protagonist. Vic no longer can be part of the criminal underground, nor should he expect to find acceptance in the legitimate business world. Though obviously a flawed individual with a shady history, like so many film noir protagonists he does reveal a moral compass. Ultimately, he comes clean with both Christine and his uncle about who he really is and what he has done. The ironic atmosphere often crucial to the film noir manifests itself in terms of Vic's $100K that eludes his grasp. When the money is as close to him in Marbella as it is going to get, he finds himself in a painfully awkward position:  to acknowledge any sense of his humanity would destroy him. Even more ironic, it turns out only the poor benefit from the $100K that Vic hoped would enrich his life exclusively.

Director Robert Siodmak was one of film noir's most frequent and consistent contributors. His optimal work in the genre includes PHANTOM LADY (1944), THE KILLERS (1946) and CRISS CROSS (1949). I would not put DEPORTED in Siodmak's upper tier, but I found it to be a sturdy motion picture that withstands repeat viewings without issue. The screenplay was by writer/producer Robert Buckner, who adapted the story PARADISE LOST '49 by Canadian novelist Lionel Shapiro. Incredibly prolific cinematographer William H. Daniels also handled the camera for a respectable film noir lineup that includes BRUTE FORCE (1947), THE NAKED CITY (1948), ABANDONED (1949) and WOMAN IN HIDING (1950). DEPORTED was shot on location in Italy, and the influence of Italian neorealism is apparent. From a cinematography standpoint, the first noirish sequence occurs roughly a half hour into the film, when Vic and Christine have coffee on her terrace. The concluding sequence plays out in undeniable noir fashion:  a tense confrontation in a claustrophobic warehouse, well handled by Daniels. Jeff Chandler is credible enough in the lead role, though I could not watch without thinking about how ideal this role would have been for Humphrey Bogart. Actually, the other actors considered for the lead were Dana Andrews, Victor Mature and John Garfield. Sadly, both Jeff Chandler and Märta Torén would die young:  Chandler at 42 and Torén at 30. 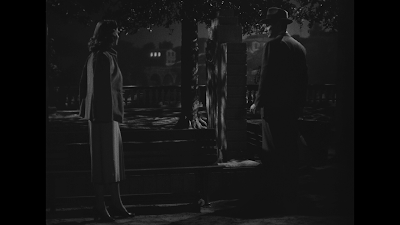 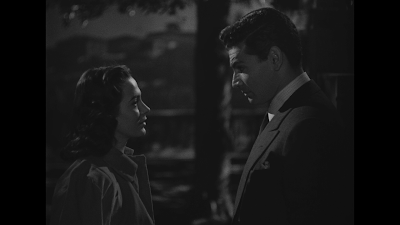 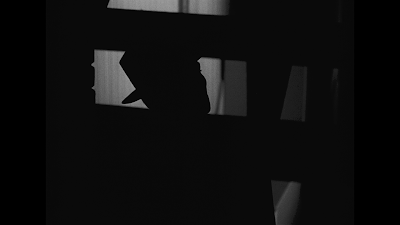 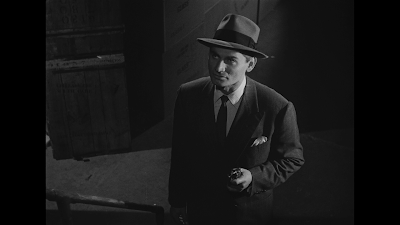 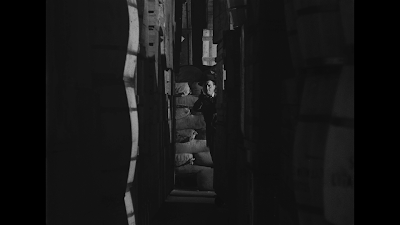 This single-layered Blu-ray edition from Kino Lorber, released late last year, as far as I know marks the domestic debut of this title on home video. Framed at the original theatrical scope of 1.37:1, the transfer impresses for the most part while the occasional speckles, scratches and other artifacts that plague the opening credits calm down considerably as the film unspools. Film historian Eddy Von Mueller recorded a fresh audio commentary for this "runaway production" (a film shot primarily outside of the Hollywood area). Shooting required three weeks in Italy, two weeks on the studio lot and a $170K budget. Von Mueller makes a lot of good observations about Vic, a two-time alien:  first as an Italian immigrant in the US, then as a deportee. DEPORTED is not a film noir in Von Mueller's estimation, which is easy enough to debate. At minimum I consider it what film scholar Alan K. Rode might label "noir stained." Where Von Mueller and I find a lot of common ground is within the safe assumption that Vic represents all the best and worst impulses of American leadership. Through our lead protagonist Vic, the production endorses the Marshall Plan, the American effort to prop up Western Europe after WWII, while it delivers something of an apology for American deficiencies. Christine mirrors the international reaction to idealistic American compulsions. She even declares her love for Vic after she comes to terms with his worst qualities. The filmmakers ask the audience to do the same when it comes to American foreign policy.

The disc includes a collection of trailers for comparable titles available from Kino Lorber. 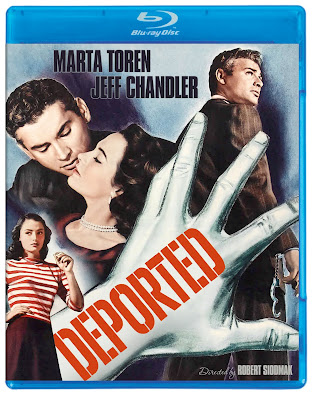 Email ThisBlogThis!Share to TwitterShare to FacebookShare to Pinterest
Labels: DEPORTED (1950)